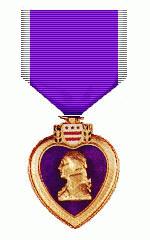 Members of Chapter 2222 of the Military Order of the Purple Heart said they will be in the parade to show their unconditional support for America’s soldiers.

“I am very proud to be part of (the parade) because a lot of people feel that being in Iraq is the wrong thing,” said Winterwerp, whose legs were scarred up by a landmine in Korea.

It is also the first time any Purple Heart chapter has marched. James Hontz, aide-de-camp for Maryland, suggested this fall that the group should apply. He got the go-ahead from the national organization.

“I felt that we should have something in the parade itself drawing attention to those who have been wounded in combat through all our history,” Hontz said.

The group was chosen from among more than 340 organizations that applied. Its participation meshes nicely with the inaugural’s theme, “Celebrating Freedom, Honoring Service.”

“We deserve to be in the parade, the least (reason) of which is that we’re at war,” a veteran said.