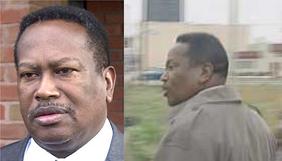 Alright, here is some more information on the Election Fraud-Murder-Crack Planting-Obstruction Investigation in East St. Louis. First of all… some background on the office raid back in November:

Two weeks after the Nov. 2 election, a grand jury was convened and at least 14 of the city’s 44 precinct committeemen, including Ellis, were called to testify. Five days after the first round of grand jury testimony, a group of FBI agents swarmed City Hall during business hours, asked workers to step away from their desks and began to unhook computers and to put files into boxes.

Ellis, who served prison time 14 years ago on federal extortion charges, said he had no idea what the federal government was looking for in his office.

Here’s the goodies on what the FBI was investigating:

FBI agents even shut down ESL City Hall, raiding the offices of the ESL City Manager, Bob Storman, Regulatory Affairs Director, Kelvin Ellis , seizing boxes of records and computers as evidence into what has become a far-reaching investigation of scandalous proportions.

Those within ESL political circles have been anticipating such an investigation for some time. Nonetheless, this “political cattle call” sent ESL political big shots running for cover, prior to being herded into court for their initial November 18 testimony.

According to sources, those subpoenaed were required to produce records pertaining to their receipt of money during the November 2 election.

Illinois State Board of Elections records reveal that 40 (of 44) ESL precinct committeemen have received nearly $230,000 (collectively), over the past four years, for their ‘political activism’ in ESL elections.

Sources also stated that, on October 31, over $80,000 was distributed to ESL politicians, at the East St. Louis VFW Hall, for the purpose of “getting out the vote” (wink, wink).

And, finally for your viewing pleasure, you can watch the camera men follow the suspects on Friday the day the indictment news broke by going here.