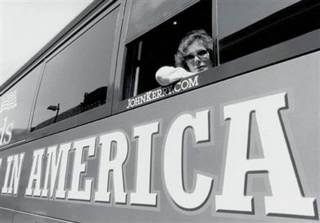 Don’t put that copy of Unfit for Command up just yet. John Kerry is not ruling out an ’08 run. He already has a staff plotting on how he can defeat Hillary in the Iowa caucuses. Here are some of my favorite lines from the Newsweek chit chat with John Kerry on why he lost:

– Because of, a somewhat stoical and severe New England upbringing, Kerry has a tendency to natter at his subordinates, to blame everyone but himself.

So everyone in New England “because of their upbringing” blames others and picks on subordinates? I am going to just not believe that.

– In the heady days before the election, Kerry’s top aides sat around picking a cabinet. Nowadays the foreign-policy team still meets on the assumption that it could be reconstituted for ’08. But the reality is, “it’s mostly sitting around some lawyer’s office and asking each other if we’ve heard about jobs,” says a member of the team.

Thank God the the economy is doing so well! I am sure that they will have no problems in their job search- unlike in Europe.

– He will introduce two bills in the Senate: to provide for health insurance for every child in America and to increase the size of the U.S. military by 40,000 troops.

Looks like JFK is going to work on building a congressional resume that actually “adds” to the military for a change of pace.

– As this reporter left his house in November, Kerry called out and followed him down the street. He wanted to show a letter from a schoolgirl that had been left on his stoop. The letter read, in part, “John Kerry, you’re the greatest!” Kerry looked into the reporter’s eye. “The pundits have never liked me,” he said. “Is it the way I look? The way I sound?”

I like this particularly since the major media did all they could to help elect Kerry. Including this quote from Newsweek Assistant Managing Editor:

– Kerry tries to comfort his wife, Teresa, who suffers from migraines and has taken personally widespread criticism (much of it by campaign staffers) of her role in the campaign.

For Teh-ra-zah, I suggest eating 9 gin soaked white raisins each day. If that does not work then just polish off the bottle.