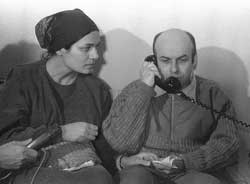 This week George W. Bush further defined and expanded the Bush Doctrine in his Inaugural Speech. After 9-11 new rules rules were immediately put into place. The United States would confront terrorists and the nation states that sponsor them. The US would not sit back and allow terrorist threats to grow and fester. The first test of this new doctrine was confronting the Taliban in Afghanistan. Next came the difficult task of confronting Saddam Hussein in Iraq. George Bush knew after 9-11 that the way to deal with danger was not to sit back and let threats grow or to make proposals and not back them up. We needed to deal with Iraq. Also, the Bush Administration understood that a more stable Iraq meant a more stable Middle East. And a stable Middle East meant a safer world. It is also during this time that George Bush met with Natan Sharansky.

Natan Sharansky is a former political prisoner from Russia and as a young man was sentenced to thirteen years imprisonment in the Siberian gulag. During the years of his imprisonment, Sharansky became a symbol for human rights in general and Soviet Jewry in particular. A campaign for his release was waged tirelessly by his wife, Avital, who emigrated to Israel immediately following their wedding with the hope that her husband would follow shortly. Natan speaks often of his admiration of Ronald Reagan:

When Ronald Reagan called the USSR an evil empire he was fiercely criticized by many in the West who saw him as a dangerous warmonger. But when we in the Gulag heard of Reagan’s statement, we were ecstatic. We knew that once there was no moral confusion between the two types of societies, once good and evil were kept separate, the Soviet Union’s days were numbered. Soon, the most fearsome totalitarian empire in human history collapsed without a shot being fired and the cause of peace and security was advanced. I have no doubt that moral clarity will have the same effect today and equally serve the cause of peace, stability and security around the world.

It is also his beliefs in Freedom that attracts him to President Bush. Natan met with the president late last year to discuss his new book The Case for Democracy. The Power of Freedom to Overcome Tyrany and Terror…

…There are those who are sceptical of the power of freedom to change the world. I felt that the arguments of these sceptics had to be answered. The three main sources of scepticism are first, that not every people desires freedom; second, that democracy in certain parts of the world would be dangerous; and third, that there is little the world’s democracies can do to advance freedom outside their countries.

This scepticism is the same scepticism I heard a generation ago in the USSR when few thought that a democratic transformation behind the iron curtain was possible. Just as the sceptics were wrong then, I am convinced they are wrong now about the possibility of freedom spreading to the Middle East…

The two most important things that can be done to promote democracy in the world is first, to bring moral clarity back to world affairs and second, to link international policies to the advance of democracy around the globe.

President Bush has promoted Natan’s book to his staff. From the sound of his Inaugural Speech this week, the president like Natan understands the Power of Democracy, the Power of Moral Clarity and the Power of Freedom.