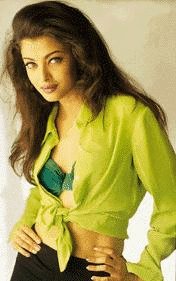 From Bollywood to Hollywood

The reigning queen of Indian cinema and former Miss World, Aishwarya Rai is making the jump from Bollywood to Hollywood. Bollywood films reach an audience of 5 billion which is twice that of Hollywoood. One reason the films have such universal appeal is because they’re squeaky-clean. There are no sex scenes, not even kissing. Every time you think someone’s going to do it, they’ll burst into song instead. According to 60 Minutes:

Unlike some of her Hollywood counterparts, Rai’s very much like the women she portrays: wholesome, dutiful and deeply religious. So much so, she insisted we visit her favorite temple for this interview. It’s more than 200 years old and every week more than 100,000 people come from all over India to make offerings and pray to Lord Ganesh, the half-elephant/half-man Hindu god of happiness.

She says being treated as sort of a goddess in this way, “makes me feel guilty. I’ll be very honest. When there’s a distraction at the place of worship I kinda get a bit guilty. And I kind of say, ‘Lord, forgive me. This isn’t intended.'”

It ought to be interesting to see how leading ladies in Hollywood get along with this outsider who sticks to her principles and does not delineate from them to further her career. I hope that she does well for India’s sake and because of what she stands for. It would be heartening to see more principled, faithful women on the Hollywood screen. It is also about time that Hollywood sees that family oriented movies (see Shrek, The Passion of Christ, The Incredibles) are good for business.