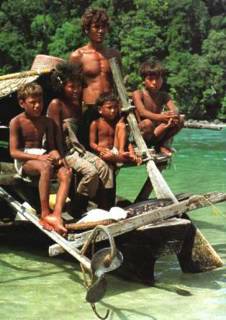 No Help for the Suffering

The silence continues from Burma. As bodies rot in the sea, the government continues to deny the level of destruction from the Boxing Day tsunami…

Burma remains silent as more than 30 sea-gypsies, also known as Salon or Moken, from Mergui (Myeik) Archipelago are still missing because of the deadly tsunamis.

Despite independent reports of deaths and losses of fishing boats in the southern Burmese region of Tenesserim Division, the local authorities are still denying the truth of the reports…

But death is being reported from outsiders:

…There has been a report that numerous Burmese corpses, presumably, victims of recent tsunamis, have been found by Thai fishermen on Burmese waters.

There are many Thai fishing boats from Ranong trawling on Burmese waters around coastal areas near Rangoon, Moulmein and Arakan State.

A wife of one of the Thai fishermen says that the fishermen discovered more than 80 corpses including men, women and children.

The fishermen tried to salvage the corpses and hand over them to the Burmese authorities at the nearest coast, but they were decomposing so badly that it was impossible for the fishermen to haul them in one piece.

…No boats belonging to sea-gypsies, also known as Salon or Moken, have been seen at a jetty of Ranong where they used to frequent for selling their catches and shopping their essentials. And, Burmese fishermen from Kha Pyat Thaung Village, Laputa Township in the delta region of Irrawaddy Division who were hardest hit by recent tsunamis, are still too scared to return to sea for fishing and their family members are in danger of starving as they have no other way to make a living.

Jim Hoft
Jim Hoft is the founder and editor of The Gateway Pundit, one of the top conservative news outlets in America. Jim was awarded the Reed Irvine Accuracy in Media Award in 2013 and is the proud recipient of the Breitbart Award for Excellence in Online Journalism from the Americans for Prosperity Foundation in May 2016.
Crazed Man Who Attacked Dave Chappelle on Stage Says He Was Inspired by Actor Will Smith
Never-Trump Leader Opens Rally for Brian Kemp and Turncoat Mike Pence in Georgia -- With Only a Couple Hundred Supporters in the Crowd
Hedge Fund CEO and GOP Candidate David McCormick Files Lawsuit in PA GOP Senate Primary Race - Demands Undated Ballots that Arrived Late Be Counted in Race
Woke Army Considers Letting Soldiers Change Base or State if They Don't Like Local Laws on Gender, Racism or Abortion
Leftist DC Archbishop Gregory Stands with Pelosi and Her Abortion to Birth Policies - Will Not Order Priests to Refuse Her Communion
See more...