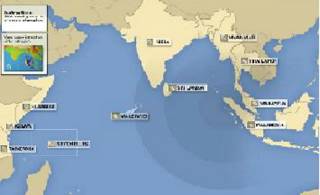 You can see from the path of the tsunami that Burma (Myanmar) was more of a direct hit than Thailand yet the government is reporting very low casualties (59). Looking at the destruction of neighboring Thailand (4900 confirmed dead with thousands still missing) this would appear quite impossible especially with more coastline exposed to the tsunami’s path than Thailand. From National Review:

It seems likely that Burma too suffered horribly from the tsunami – but that the suffering is being concealed from the world by that country’s corrupt and brutal military government. Question: By what right does a small group of violent men deny their people access to international help after a disaster? Looking back on Rwanda, many people around the world came to reject the idea that “sovereignty” entitled a government to massacre its people. But what about consciously dooming people to death by abandonment – can the claim of “sovereignty”really entitle a government to do that?