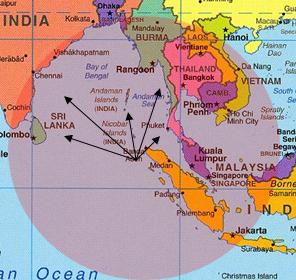 The Military Government of Burma is reporting a total of “59” deaths along its 1930 kilometers of coastline due to the tsunami that has ravaged Southeast Asia. If you follow the arrows in the above map you see that as of this morning Thailand was reporting 4,900 confirmed dead with thousands still missing. India is confirming 9,500 dead with 6,000 still missing. Sri Lanka is reporting 30,000 dead with thousands more missing. This doesn’t add up. The China Standard agrees with the low totals:

The splintered remains of a wooden bridge just ahead, on the large island of Palao Ton Ton, told a different story. The fisherman said he saw 50 people swept to their deaths from this bridge alone. The red-and-white woodwork lay smashed in pieces and a large gap yawned in the middle of the span. “All the people were just swept away,” said the fisherman hopelessly.