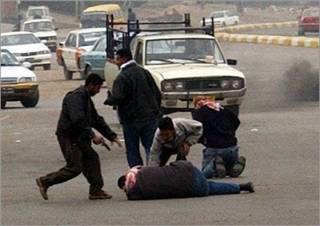 Accusations of complicity with terrorists in Iraq were made recently by Belmont Club and others. The issue relates to the shocking photo, recently published by the AP, showing three terrorists in the act of murdering two Iraqi election workers on a street during daylight. The photographer was obviously within a few yards of the scene of the murder, which raises obvious questions, such as 1) what was the photographer doing there; did he have advance knowledge of the crime, or was he even accompanying the terrorists? and 2) why did the photographer apparently have no fear of the terrorists, or conversely, why were the terrorists evidently unconcerned about being photographed in the commission of a murder?

Now it appears that the AP is responding:

A source at the Associated Press knowledgeable about the events covered in Baghdad on Sunday told Salon that accusations that the photographer was aware of the militants’ plans are “ridiculous.” The photographer, whose identity the AP is withholding due to safety concerns, was likely “tipped off to a demonstration that was supposed to take place on Haifa Street,” said the AP source, who was not at liberty to comment by name. But the photographer “definitely would not have had foreknowledge” of a violent event like an execution, the source said.