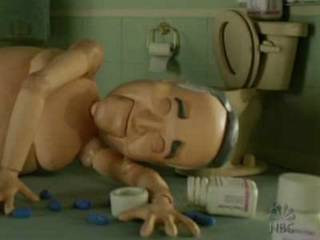 The animated sketch left one senior production source stunned and outraged, the DRUDGE REPORT has learned.

“Would we have done this to [John] Belushi? [Chris] Farley?” the source said on Sunday from New York.

The source asked not to be identified fearing retribution from SNL’s executive producer Lorne Michaels.

“We’ve had more fu**ing drug addicts on this show through the years… more tragedy. I have lost count. Did we ever have some laughs about Robert Downey Jr.’s serious drug addiction?”

The crass montage which aired on NBC featured Limbaugh vomiting from drugs on a bathroom floor, in an apparent overdose.

Last year, Limbaugh announced to his radio audience that he was seeking treatment for an addiction to pain medication.

I guess it’s not such a bad idea to go to bed early!

Jim Hoft
Jim Hoft is the founder and editor of The Gateway Pundit, one of the top conservative news outlets in America. Jim was awarded the Reed Irvine Accuracy in Media Award in 2013 and is the proud recipient of the Breitbart Award for Excellence in Online Journalism from the Americans for Prosperity Foundation in May 2016.
Col. Phil Waldron Tells Michigan Lawmakers Truckloads of Ballots for Joe Biden Were Inserted into the 2020 Election
"I Knew What was at Stake From What I Witnessed at the TCF and My Heart Broke" - Michigan GOP Elections Witness and Immigrant SHOCKED by Corruption and Fraud At TCF (VIDEO)
"I Can't Get a Job Any More Because Democrats Like to Ruin Your Life!" - GOP Witness GOES OFF at Michigan Hearing (VIDEO)
BREAKING: Dominion Software was Accessible to Far Left Indivisible Organizers on Election Night -- An Obama-Linked Group That ENDORSED JOE BIDEN
Far Left Hack Jen Psaki Lashes Out at Conservatives as "Russian Tools" After She Is Pictured in Communist Hat Standing Next to Lavrov
See more...