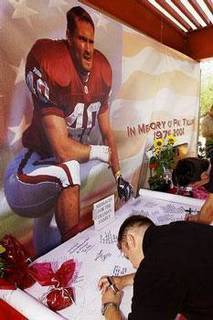 He may not get “Sportsman of The Year” from Sports Illustrated but he defined the greatness of this country and of humanity with his selfless sacrifice. Ann Coulter says it best:

American hero Pat Tillman won a Silver Star this year. But unlike Kerry, he did not write his own recommendation or live to throw his medals over the White House fence in an anti-war rally.

Tillman was an American original: virtuous, pure and masculine like only an American male can be. The stunningly handsome athlete walked away from a three-year, $3.6 million NFL contract with the Arizona Cardinals to join the U.S. military and fight in Afghanistan, where he was killed in April.

He wanted no publicity and granted no interviews about his decision to leave pro football in the prime of his career and join the Army Rangers. (Most perplexing to Democrats, he didn’t even take a home movie camera to a war zone in order to create fake footage for future political campaigns in which he would constantly palaver about his military service and drag around his “Band of Brothers” for the media.)

Tillman gave only an indirect explanation for his decision on the day after 9-11, when he said: “My great grandfather was at Pearl Harbor, and a lot of my family has gone and fought in wars, and I really haven’t done a damn thing as far as laying myself on the line like that.” He said he wanted to “pay something back” to America.

He died bringing freedom and democracy to 28 million Afghans – pretty much confirming Michael Moore’s view of America as an imperialist cowboy predator. There is not another country in the world – certainly not in continental Europe – that could have produced a Pat Tillman.

The Pat Tillman Foundation seeks to carry forward his legacy by inspiring and supporting others striving to promote positive change in themselves and the world around them.