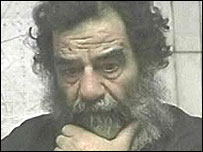 It was one year ago today that our troops pulled Saddam from his underground palace. Congratulations to our troops on that great find! Just think… it was just one year ago that Howard Dean was leading the Democrat “Brat Pack” and still hadn’t let out his now famous scream, Afghanistan had yet to have it’s first democratic election, George W. Bush had not been re-elected, it had been nearly a century since the Boston Red Sox had won a World Series, and Kofi Annan was still head of the UN …oops, sorry bout that… maybe next year!!!