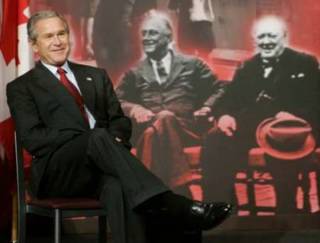 After winning re-election and “reshaping the rules of politics to fit his 10-gallon-hat leadership style,” President George Bush for the second time was chosen as Time magazine’s Person of the Year.

Also, congratulations to Powerline for the Time award of the “Blog of the Year”. Their Big Moment came on September 9th with there 61st Minute Posting and the toppling of the Rather icon.