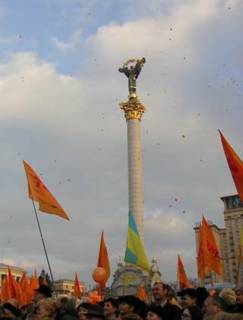 Some have described the crisis in Ukraine as a contest for influence between Russia and the West, with the West backing opposition leader Viktor Yushchenko in the same measure that Russian President Vladimir Putin has supported the official candidate. That is a gross distortion. For the Ukrainians who have spent four freezing nights in the streets of Kiev, the fight is not about geopolitical orientation — most favor close relations with Moscow — but about whether theirs will be a free country, with an independent press and courts and leaders who are chosen by genuine democratic vote. Mr. Putin, who has channeled hundreds of millions of dollars into the prime minister’s campaign, is backing the imposition of an authoritarian system along the lines of the one he is creating in Russia — with a propagandistic regime, controlled media, official persecution of dissent, business executives who take orders from the state, and elections that are neither free nor fair.

Vaclav Havel, former Czech president and leader of the country’s 1989 “Velvet Revolution” that overthrew Communist rule, has urged Ukrainians to keep up their protests against a disputed presidential election.

With the gulf deepening between the opposition and the government, a key mediator — Lech Walesa, founder of the Polish Solidarity movement — arrived in Ukraine to try to help pull this deeply divided nation of 48 million back from the brink of conflict.

Walesa said he was “amazed” at Yushchenko supporters’ enthusiasm and predicted their protest would succeed.

Powell challenged Ukrainian leaders “to decide whether they are on the side of democracy or not” and warned of “consequences for our relationship, for Ukraine’s hopes for a Euro-Atlantic integration and for individuals responsible for perpetrating fraud.”

Singer Ruslana, winner of the 2004 Eurovision Song Contest, has announced a hunger strike to protest the official results of Ukraine’s runoff presidential election.

In support of western-leaning opposition candidate Viktor Yushchenko, she has put on a orange ribbon in front of demonstrators at Kiev’s Independence Square.

Shades of Prague, Belgrade, Tiblisi? To veterans of past velvet revolutions, it’s eerily familiar. “Yushchenko, Viktor Yushchenko,” was, they say, “cheated us for presidency by his political nemesis, Viktor Yanukovic.

Victor Yushchenko alleges that twice his political enemies tried to kill him. He claims to have been poisoned in September.

This is him before it happened; now, his face is hideously scarred. The government said he must have eaten some bad sushi.

Check out Victor’s Model looks before the poisoning and today here.

Jim Hoft
Jim Hoft is the founder and editor of The Gateway Pundit, one of the top conservative news outlets in America. Jim was awarded the Reed Irvine Accuracy in Media Award in 2013 and is the proud recipient of the Breitbart Award for Excellence in Online Journalism from the Americans for Prosperity Foundation in May 2016.
BREAKING: Trump to Hold Sendoff Ceremony at Joint Base Andrews on Wednesday Morning at 8 AM
Developing: Chief Justice John Roberts Says He Does Not Want to Preside Over Second Impeachment Against President Trump
Report: Mitch McConnell and Establishment Republicans Don't Want to See Trump on Ballot in 2024 (VIDEO)
AWFUL! GOP Majority Leader Mitch McConnell: Capitol "Insurrectionists" were "Provoked by the President and Other Powerful People"
WH Official: "Zero Active Threats -- Tons of Anonymous Threats -- Lines Flooded with Psychobabble and Nothing-Burgers"
See more...