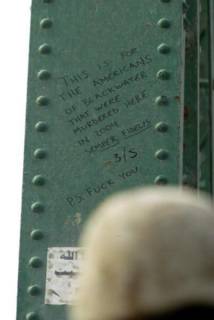 FALLUJAH, IRAQ: A US marine from the 3/5 Lima company stands in front of graffiti scribbled on the bridge crossing the Euphrates River in the restive city of Fallujah,14 November 2004, 50 kms west of Baghdad. The bridge became famous after the death of US security officers’ charred bodies were hung on display at the end of March 2004. US-led forces will probably need up to five more days to finish clearing Fallujah of rebels after a week of fierce fighting that left more than 1,200 insurgents dead, US marine officers said today.