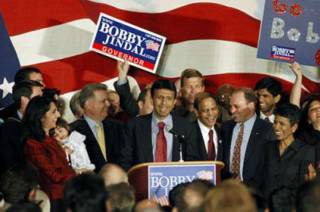 Look out for Bobby Jindal

Bobby Jindal edged his rivals for election to Congress in Louisiana’s First Congressional District on November 2nd with a mere 78 percent of the vote. This after Bobby Jindal narrowly lost to Democrat Kathleen Blanco in his Louisiana gubernatorial bid in 2003. Bobby Jindal is the only Indian-American in Congress since Dilip Singh Saund of California in 1956.

Jindal is a 33-year-old wunderkid — a policy wonk with degrees from Brown and Oxford — whose parents emigrated from India to Baton Rouge before he was born.

Jindal has an extraordinary life story. His given first name is Piyush, but at age 4 he decided to change it to Bobby. In high school, he abandoned his parents’ Hindu faith and converted to Catholicism. (His father is an engineer, his mother an assistant secretary in the Louisiana state labor department.) By the time he graduated from Baton Rouge High School, Jindal was a Republican. When he got to Brown–an eight-year medical program had attracted him–he naively asked about joining the College Republicans. There was no chapter at Brown. The Republican club Jindal subsequently helped found grew, he says, to 300 members, a surprisingly large membership for a liberal Ivy League school.

His post-Brown career has been dizzying. Instead of pursuing medicine, Jindal studied at Oxford for two years as a Rhodes Scholar, worked the next two years for McKinsey, the business consulting firm, and at age 24 returned to Baton Rouge to take over, at Foster’s urging, the mammoth Department of Health and Hospitals. There, he transformed a $400 million deficit into a $220 million surplus…

He’s issued lengthy position papers on health care, ethics, economic opportunity, the environment, schools, and religious faith. These were packaged together last week in a glossy 24-page booklet entitled “The Jindal Blueprint for Louisiana–A Bold New Vision.” Most notable is the section on “defending the role of faith and values in our state.” In it, he tells how a friend led him to Christian faith. “Today, my faith in Jesus Christ is central to who I am, and I pray regularly for God’s wisdom in all the parts of my life,” he says.

Jindal says he became a Republican as a teenager for two reasons. In Louisiana, with its history of political corruption, Republicans are the reform party. Also, they’re the champions of opportunity. “I’d seen what great opportunity my father had [in America] as an engineer,” he said in an interview. His mother has succeeded in state government, he said, and “I’m running for governor. This is an amazing country.”

I see great things ahead for this superstar!

Thanks to Powerline for the News