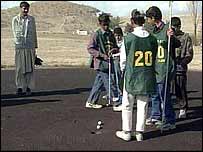 For you duffers out there…

There’s not much green about the green.

Afghanistan has been hosting its first golf tournament for more than 30 years.

Some 40 golfers entered the competition on a course in a picturesque valley, once a battlefield, outside the capital, Kabul.

The land on which the Kabul Golf Club stands was the scene of clashes between rival Mujahideen factions in the 1990s.

It remained shut when the Taleban swept to power. Golf, a game they associated with wealthy Western diplomats, was one of many sports they banned.

Now it has finally reopened but the process was not without its problems.

The area first had to be made safe by clearing stray landmines and a lack of irrigation has meant that many of the “greens” are actually dark grey, made from oiled sand.

Security fears have meant that many of those who took part in the tournament were accompanied by Kalashnikov-carrying caddies.

But the owners have high hopes for the club, whose annual membership costs 7,500 Afghanis ($160).

“In the past there was a lot of killing going on here,” club pro Mohamad Afzal Abdul told Reuters news agency.

“Right now are trying to fix up this area and give people some hope to understand a better life.”