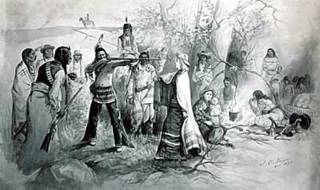 Many Indians feel they’re being “true” Indians when they hate America. To them, any Indian with favorable sentiments toward the country is a “sell-out,” or a weak, damaged Indian. But the opposite is true. Their position of resentment is servile, and though it’s politically lucrative for the leftist, it’s psychologically inhibitive and harmful to Indians. Those who advocate dissatisfaction are doing the real damage.

Certainly, many Indians today have suffered horrible abuse from racial and cultural prejudice. They find solace, therefore, in racial, cultural resentment and hatred. But the plight of these wronged Indians should never be made into a national image, or a cultural model. To broker discontent, to encourage anger, insults the strong. Hatred suffocates every natural aspiration of the heart, and cuts off the avenues of true development in a person. Self-appointed Indian “leaders” who glorify revenge are deluded. Even protesting the “Washington Redskins,” a career focus for Susan Harjo, is merely a self-serving maneuver for profit, and exemplifies a fussy feminist, rather than a true warrior. These kinds of Indian “leaders” are quickly becoming passé, as more young people realize the burdensome and futility of professional discontent.

…this is dedicated in thanksgiving to my “new brothers” and for the bountiful gifts of this great land.