The federal government was weaponized against the speech of everyday Americans.

Initially, the team was just supposed to ward off foreign cyberattacks and was the Countering Foreign Influence Taskforce.

It changed its name in 2021 reflecting that it would now be focused on domestic speech rather than just foreign threats.

Bailey said, “This is just the tip of the iceberg. We look forward to releasing more documents, as well as the highlights of the Scully deposition, in the days to come.”

PART THREE: In our efforts to protect the First Amendment, we deposed Brian Scully of the Cybersecurity and Infrastructure Security Agency (CISA), a key player in the federal gov’s efforts to suppress so-called “mis-, dis-, and mal-information” (MDM) about elections. (1/10)🧵

CISA, housed in the Department of Homeland Security (DHS) and created originally to ward off foreign cyberattacks, has now been weaponized to suppress domestic speech. (2/10)

This is the same group that launched the Orwellian “Disinformation Governance Board” last year. Due to immense public backlash, they formally “disbanded” that group, but its work continues. (3/10)

Our depo. focused on Scully, leader of the “Mis-, Dis, & Malinformation” Team (started in ’18 as the Countering Foreign Influence Taskforce to ward off foreign cyberattacks). In 2021, the CFITF changed its name, reflecting its shift from foreign threats to domestic speech (5/10)

A couple of the exhibits from yesterday’s deposition are included below: (6/10) 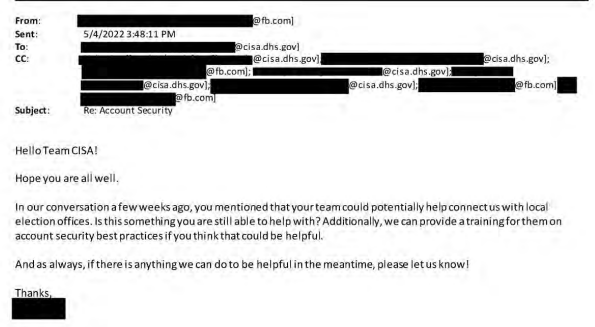 To defend the 1st Amendment, it’s imperative that we stand against the federal gov. weaponizing its resources against the very people it’s intended to protect. Missouri will continue to lead the charge against the blatant attack on Americans and their right to free speech. (9/10)

This is just the tip of the iceberg. We look forward to releasing more documents, as well as the highlights of the Scully deposition, in the days to come. (10/10)

The GOP needs to put a stop to this!