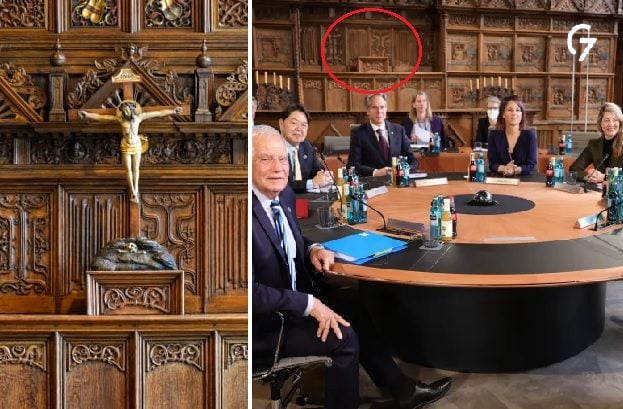 The Foreign Ministry of Germany removed the ancient cross in Münster Hall for the recent G7 meetings. The Peace of Westphalia was signed in Munster in 1648.

The Western elites no longer wish to be reminded of their Christian faith or history.

The cross was removed by Annalena Baerbock, a radical member of the Greens.

G7 summit in Münster: The foreign ministers of the most important countries in the world are there – but the Christian symbol of God must remain outside.

Federal Foreign Minister Annalena Baerbock (41, Greens) had the centuries-old crucifix (representation of Jesus nailed to the cross) removed from the Hall of Peace in the historic town hall in Münster for the duration of the G7 summit.

The G7 foreign ministers’ meeting takes place in Münster’s historic Peace Hall: in 1648 it was the scene of the invocation of the Spanish-Dutch Peace – part of the Peace of Westphalia.

But for the duration of the meeting, Baerbock blocks out an important part of the story: the 482-year-old council cross.