This will take place outside 510 S 3rd Ave. in Phoenix, Arizona at noon.

According to Bergquam, the group will protest Maricopa County’s censorship and removal of conservative press and “what’s going on in that building.”

Maricopa County is still counting the ballots from Tuesday’s election, and they are expected to continue through the weekend and into next week.

The Gateway Pundit reported yesterday that TGP’s  Jordan Conradson and RAV’s Ben Bergquam were physically removed from the Maricopa County presser on Thursday afternoon. Drones then began tracking and following them after they were escorted off the public land. 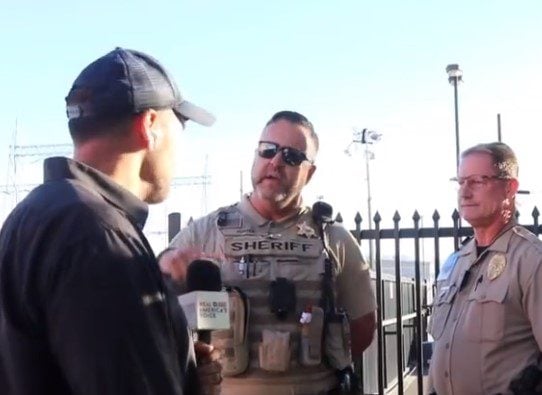 The PIO (Public Information Officer), Ron Coleman, coordinating the press conference, told Jordan and Ben, “You can go to the free speech zone and protest if you want to.”

Before this altercation, The Gateway Pundit sent a cease and desist letter to Maricopa County, demanding that they allow Conradson to attend the presser.

Now, we are suing Maricopa County for its failure to uphold the First Amendment by censoring and barring journalists from entering their conferences based on their definition of a journalist.

Ben Bergquam received the following BS email lying about the incident and claiming that he created a “security risk.”

In reality, County employees told Bergquam to wait outside until his credential was approved, and he did just that.

Maricopa County Supervisor Bill Gates appears to be running this election like a criminal and pushing all of the ballots from blue areas to be counted first, to sow division and demoralize Republicans. He is trying to drag this election process out before he gets recalled and/or criminally investigated by the new Attorney General, Abe Hamadeh, and the new Governor, Kari Lake.

The Gateway Pundit reported that Friday night’s ballot drop was intentionally from liberal Tolleson, Avondale, and South Phoenix to give Hobbs a bigger lead. The next ballot election day drop-off ballot dumps should be from red Republican areas of Maricopa County.

Rogers: PATRIOTS RISE UP to RALLY tomorrow SATURDAY NOON at the Maricopa County Elections office (510 S. 3rd Ave. Phoenix) to pray for the Light to shine in the darkness and for His truth to be revealed! @KariLake @bgmasters @AbrahamHamadeh @RealMarkFinchem @BenBergquam

PATRIOTS RISE UP to RALLY tomorrow SATURDAY NOON at the Maricopa County Elections office (510 S. 3rd Ave. Phoenix) to pray for the Light to shine in the darkness and for His truth to be revealed! @KariLake @bgmasters @AbrahamHamadeh @RealMarkFinchem @BenBergquam pic.twitter.com/JXJm5bBQDy

Bergquam: We just had some lovely War Room posse folks come out here and say they’re planning a rally protest tomorrow around noon out here because of partly what I’m about to tell you and what you just mentioned about The Gateway Pundit as well, and what’s going on in that building. First off, this should not take days. They knew these guys knew the potential they knew what they were expecting. It’s just like any system, it’s like any logistics, you know the numbers that are coming in, you plan for that, you hire the right people, and you’re ready. These guys are clearly just out of their depth, and the question that nobody’s asked any of them is: you had two years to plan for this, and you have utterly failed. Who’s to blame? Who needs to be fired? And I’d say, just fire them all. It’s happening tomorrow at noon, local time here, from what I understand. So, anyone in the area that wants to come out and voice their disapproval for what’s going on, that’s what’s happening at noon out here.

Bannon: That’s all going to be peaceful because this is why they put the fence around this. By the way, this is not War Room calling for this. This is what other people have said. They’ve got a lot of police officers down there. I think for no reason because they’re trying to get people scared. Just like they put all the stuff around here, the 100 troops at the Capitol and the 1000s of troops here. It’s to put optics up there.

Bergquam: What I’m hearing is it’s a march of Jericho style. They come, they pray, it’s all peaceful. They’re praying for God’s light to shine, for the lies to be exposed, and for the truth to be revealed. That’s the plan for tomorrow, from what I’m understanding. Again, we’re not organizing any of this stuff. We just may be here.

But yeah, so this is what was meant to answer your question. No, Steve, I will not be in there for the press conference today. The mini tyrants at Maricopa County have decided in their infinite wisdom that we are not allowed in our press credentials were denied for the exact same reason they denied The Gateway Pundit’s. And I’m gonna actually read this small section to you. It’s almost hysterical. So, “you’re denied because you A. do not avoid real or perceived conflicts of interests, not vague at all. And B. are not free of associations that would compromise journalistic integrity and damage credibility. Therefore, you are not a bonafide correspondent of repute in your profession. Now that email goes on to say basically a bunch of lies. I just love they threw in “repute.”

The full episode and interview can be found here.