The FBI must have an “extraordinary reason” for apprehending Houck and ransacking his home as his children watched in horror, an open letter signed spearheaded by Rep. Chip Roy, R- Tx., contends.

“There is much to learn about the extent of the FBI’s operations in this case, apparently since state-level charges were apparently dismissed by local authorities in Philadelphia,” the letter states. “Surely, the FBI must have an extraordinary reason for showing up at the home of an American family, allegedly with roughly 25 heavily armed federal agents, and arresting a father in front of his seven children

“At the moment, it appears to be an extraordinary overreach for political ends.”

Garland must publicly disclose the rationale behind the “excessive level of force used by the FBI in this case, and why the force of federal law enforcement was once again used against an American citizen in what should be a state and local matter,” the letter states.

As the Gateway Pundit has reported, Houck is a father of seven and a well-known pro-life author. He is also the founder and president of the King’s Men, an organization dedicated to helping men become better husbands, fathers, and leaders and promotes Christian values. The group also promotes therapy for recovering pornography addicts. 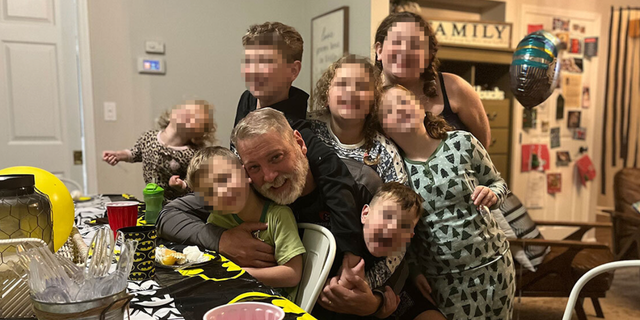 Mark Houck seen with his children

Houck was arrested by the FBI at his rural Pennsylvania home on Sept. 23 for allegedly violating the Freedom of Access to Clinic Entrances Act while protecting his son from crude actions leveled by an abortion activist who was escorting women into a Planned Parenthood clinic. Ryan-Marie, his wife and a home school mother, claims the FBI’s SWAT team surrounded their property with 15 vehicles at 7:05 am. Swarming the house with rifles in firing position, the FBI “started pounding on the door and yelling at us to open it.”

The FBI maintains the arresting officers were not part of a SWAT team.

In 2021, the 72-year-old abortion escort allegedly insistently harassed Houck’s 12 -year old son while accompanying him during sidewalk counsel in front of an abortion clinic last year. After weeks of agitation, Houck ultimately shoved the abortion escort.

“For ‘weeks and weeks,’ a ‘pro-abortion protester” would speak to the boy saying ‘crude … inappropriate and disgusting things,’ such as ‘you’re dad’s a fag,’ and other statements that were too vulgar for her to convey,” Lie Site News reports. “Repeatedly, Mark would tell this pro-abortion man that he did not have permission to speak to his son and please refrain from doing so. And “he kept doing it and kind of came into [the son’s] personal space” obscenely ridiculing his father. At this point, “Mark shoved him away from his child, and the guy fell back.

“He didn’t have any injuries or anything, but he tried to sue Mark,” and the case was thrown out of court in the early summer.”

The FBI’s intervention in the dispute is another example of the Biden administration’s politicization of the Justice Department, GOP Rep. Chip Roy warns.

“Attorney General Merrick Garland oversees an increasingly politicized FBI that seems hell-bent on making examples of average American citizens who don’t align politically with the administration,” Roy told Fox News. “Given what we know about it thus far that is what the case of the raid on Mark Houck’s home appears to be. And the FBI should immediately answer for its apparent use of a 25-30 person SWAT team with guns drawn to target Mark Houck, a pro-life father of seven, for allegedly shoving a guy in front of an abortion clinic (while he maintains he was defending his 12-year-old son).

“Congress owes the American people transparent accountability for any and all wrongdoing by the FBI and Garland’s DOJ. Even further, the FBI needs a complete and total overhaul, and we should return primary law enforcement power to the states and to get the Bureau out of the business of politics once and for all.”