The Utah County Sheriff’s Department is investigating a series of reports alleging “ritualistic child sexual abuse” and a sex trafficking ring perpetrated by high-profile individuals in the state for over two decades.

The department announced last week that it launched the investigation last April after speaking to victims from multiple counties and is urging the public to provide tips and encourage victims with knowledge of such crimes to step forward to receive assistance and aid.

“In April of 2021, an investigation began into ritualistic child sexual abuse and child sex trafficking that occurred in Utah County,” the department said in a press release. “The ensuing investigation discovered that other victims had previously reported similar forms of ritualistic sexual abuse and trafficking that occurred in Utah County, Juab County and Sanpete County during the time between 1990 and 2010. Portions of these allegations were confirmed.”

“These allegations are being investigated by the Utah County Sheriff’s Office in cooperation with other local and federal agencies,” the Utah Sheriff’s Department continued. “We are pleading with the public and encourage victims or individuals with knowledge of these crimes to contact the Utah County Sheriff’s Office Special Victim’s Unit so that they can be offered all the assistance possible. We understand that there are individuals who have concerns for their safety and/or well-being who have been silenced. We need your help.”

Special Victims Unit Detectives with @UCSO, working with investigators from multiple county and federal agencies are investigating reports of ritualistic child sexual abuse from as far back as 1990. We need your help. https://t.co/eJ4rwoElkA 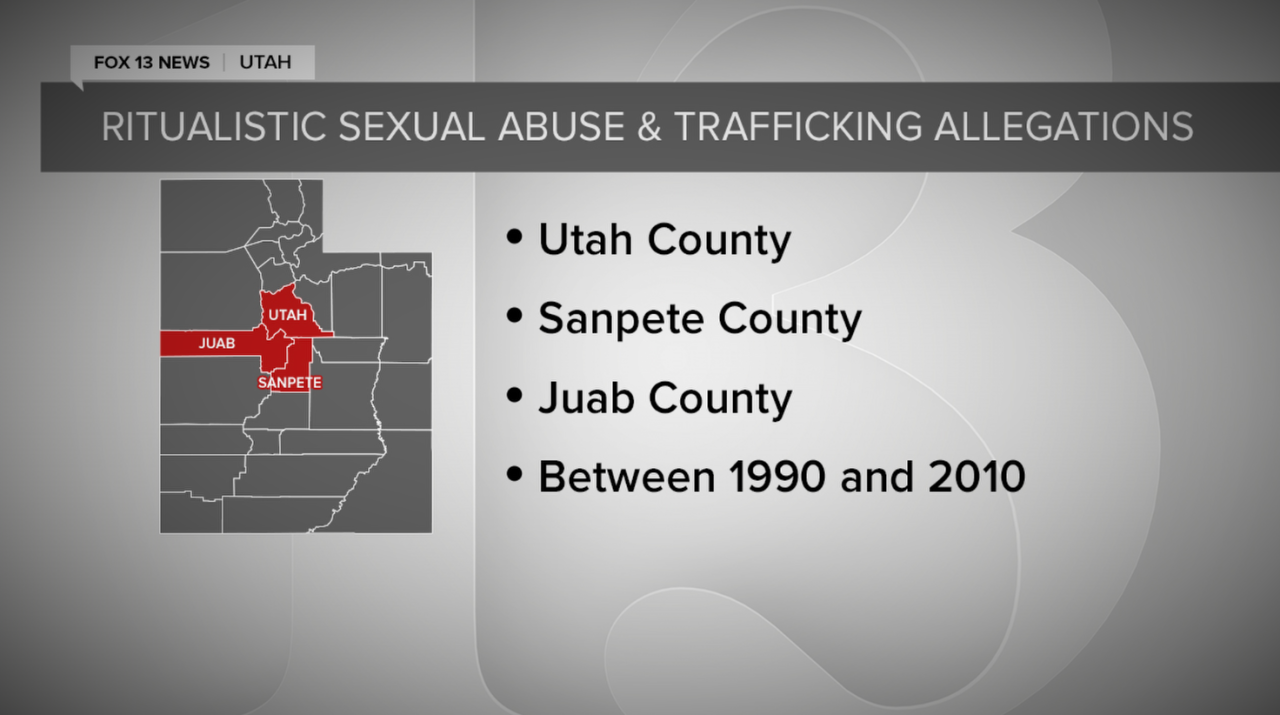 The Utah County Sheriff’s Office has not disclosed but the identity of the suspects under investigation, but “some of the subjects of the investigation are high-profile Utahns,” Fox13 reports.

The department’s announcement of the investigation prompted Utah County Attorney David Leavitt to hold a press conference calling for the resignation of Sherrif Mike Smith for “misuse of taxpayer and county resources.”

Leavitt claimed he and his wife are named in the investigation and accused of engaging in ritualistic abuse and cannibalism.

The UCSO has not publicly named Leavitt as a suspect.

A victim told Fox13 that a therapist who was charged with a series of sex crimes against young female family members is a target of the investigation. The Utah County Attorney’s Office previously dropped charges and the therapist was not convicted.

“Hypnosis was a big part of (my treatment). He told me from the very beginning, that that was his main technique,” Bluth told Fox13. “(He) would say, ‘Do you want to be healed of your homosexuality, or not?’ and the answer was yes.”

One of the targets of the investigation was a therapist previously charged with a series of sex crimes against young female family members.

The Utah County Attorney's Office dropped charges, and the man was not convicted.

Police reports indicate they had a taped confession. pic.twitter.com/ZqXGQVsCyG

In March, Utah County Sherriff’s Office rescued three women and arrested 21 people on a slew of drug and trafficking-related charges including sexual solicitation and unlawful sexual conduct, as a result of an undercover operation to combat human sex trafficking.

The group charged represents only a small margin of the overall sex trafficking problem in Utah, Lt. Jason Randall warns.

“This isn’t even the tip of the iceberg. This is like a snowflake on an iceberg. We are barely scratching the service,” Randal said during a press conference. “One of the individuals that showed up brought rope, brought tape, brought toys, brought lingerie. And this person was under the understanding they’d be meeting with a 13-year-old child.

“There’s no doubt in my mind that we have saved multiple other child victims because this man is a perpetrator and he showed up with the intent of doing harm to a 13-year-old girl.”