A video has gone viral showing an Asian man being held and beaten on a New York City subway platform by three Black men–one who held the victim and two who took turns slapping and punching the victim. The video is the latest example of criminals attacking and sometimes killing subway patrons at will. 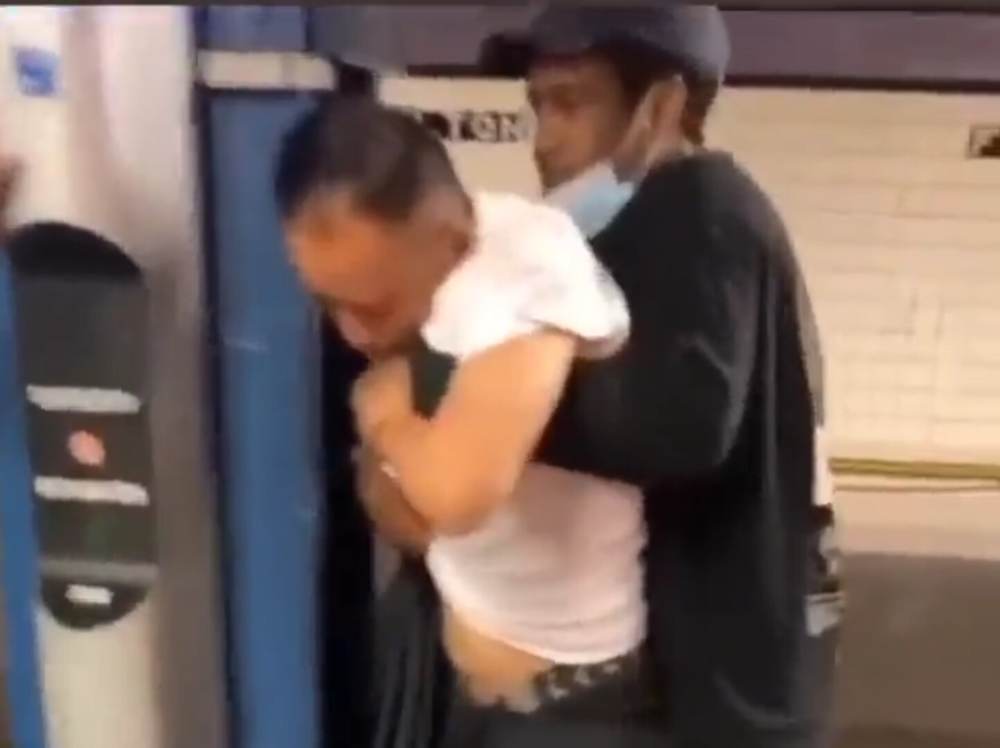 The video shows the Asian man being held tightly from behind by a Black man as first a Black man bitch slaps him and then a second Black man rains down punches on the Asian man’s head. No one appears to try to intervene while voices off camera can be heard laughing. The attack took place at a pillar labeled Fulton Street (lower Manhattan) that has an emergency call box attached to it.

The video was posted to Twitter Sunday by Asian Crime Report, “A group of men attack a man in a New York subway. The victim looks to be Asian. Asking for the public’s help in identifying the attackers and having them arrested. One man is holding the defenseless man as others punch him. New York subways are not safe. Video sent by follower.”

A group of men attack a man in a New York subway. The victim looks to be Asian. Asking for the public’s help in identifying the attackers and having them arrested. One man is holding the defenseless man as others punch him. New York subways are not safe. Video sent by follower. pic.twitter.com/pEsKFCrznY

NYPD Transit replied asking for more info which the poster said they were did not have, “Thank you for bringing this to our attention. Can you please DM me so we can gather more details about this incident?” “Sorry I have no other details. A follower sent us the video with no other information except that it’s in New York”

Earlier this week another New York City subway video went viral showing a Black man assaulting a woman passenger while no one tried to help.

This is the current state of the subways in NYC.

Condemn cops for going after fare evaders, make cops feel afraid to do their jobs, ignore the emotionally disturbed problem in the subways, and make people afraid to get involved when they witness this.

Where do we go now? pic.twitter.com/Pw7bsQz5aZ

Last Sunday a Black man shot and killed a Latino man on the subway.

On Sunday, a 48-year-old man named Daniel Enriquez was shot and killed on a Q train in lower Manhattan. This tragedy comes a month after the worst shooting on a New York City subway in history that killed one person and wounded dozens more.https://t.co/V8UDbZgk6p

The alleged killer was arrested Tuesday.

Earlier this month Frank James, the Black man arrested for a mass shooting on the New York City subway that wounded and injured dozens on April 12, pleaded not guilty in federal court to charges of “one count of a terrorist attack and other violence against a mass transportation system, and one count of discharging a firearm during a crime of violence.”

Not if he can’t control crime in the subway.