When someone is telling you how important he or she is, it is a pretty good indicator that person is not terribly relevant. I think the same principle applies to the CIA, who in the last week is bragging through sources that thanks to the Agency’s intel the Ukrainians are whacking a dozen Russian Generals and sinking the Moskva.

There was a time when the CIA actually tried to keep secrets and shied away from advertising its hidden helping hand. During the Soviet occupation of Afghanistan in the 1980s, the CIA was given the mandate of arming and training Islamic fighters eager to expel the Russians. While I am sure that the Soviets knew what the CIA was doing in general terms, the public was kept in the dark during that period, especially when the CIA started arming the Mujahedin with Stinger missiles and Soviet helicopters started falling from the skies. That is not the CIA today.

There is open talk about training Ukrainian paramilitaries in guerrilla war, supplying weapons and passing on critical intelligence to Ukraine that is then used to attack Russian targets. Instead of empowering the Ukrainian military, this kind of leak makes them appear weak. They cannot fight the Russians on their own. Nope. They need Uncle Sugar to give them their armament fix. If you are the power behind the throne then you should keep that quiet. Silence helps protect your privileged position.

I believe that Russian intelligence professionals are scratching their heads trying to figure out what the hell America is really doing. They probably are wondering if this leaking of sensitive information is actually a clever capitalist plot to get Russia to chase imaginary squirrels? Or are the Americans just plain incompetent? I side with the incompetence explanation.

CIA Director Bill Burns warned on Saturday that Russian President Vladimir Putin has staked a lot on the second phase of his war in Ukraine and believes that “doubling down” on the military conflict is still his best path forward. It is this mindset, Burns said, that makes the second phase of the offensive at least as risky — and maybe even riskier — than the first phase of the conflict. “He’s in a frame of mind in which he doesn’t believe he can afford to lose,” Burns said about Putin during a Financial Times event in Washington. “I think he’s convinced right now that doubling down still will enable him to make progress.” “His convictions about Ukraine and the reality of Russia’s capability to continue to grind away at Ukrainian resistance — I don’t know whether that’s been shaken yet,” he added. “So the stakes are quite high.”

The disconnect from reality displayed by Burns is frightening. Putin has been very clear in public about his intentions in Ukraine–demilitarize and de-Nazify. Burns’s assertion that Putin is doubling down is based on the false conclusion that Ukraine beat back the Russian offensive (i.e. Phase I) and that the Russians are now desperate to salvage victory from the wreckage of defeat. With that in mind, consider today’s events in the Donbas and the Crimea.

‘Cauldron’ is a cool military term for encirclement. Why call surrounded troops a “cauldron”? We have the Germans to thank for this term. “Kessel” is the German word for “cauldron” and that term was used by German generals to describe the result of surrounding opposing military forces. Russian military doctrine uses the word “cauldron” to describe a very large, strategic-level concentration of trapped enemy forces. This differs from the terms used to describe the encirclement of an operational unit (such as an isolated battalion) or a tactical unit (a company-sized element). The Russians refer to those as Sack (i.e. meshok) and Nest (gnezdo) respectively.

Russian sources are reporting (and Ukrainian sources are not denying) that a major breakthrough came today in Popasnaya, with the Ukrainian Armed forces withdrawing to the west toward Kramatorsk. Take a look at the following map: 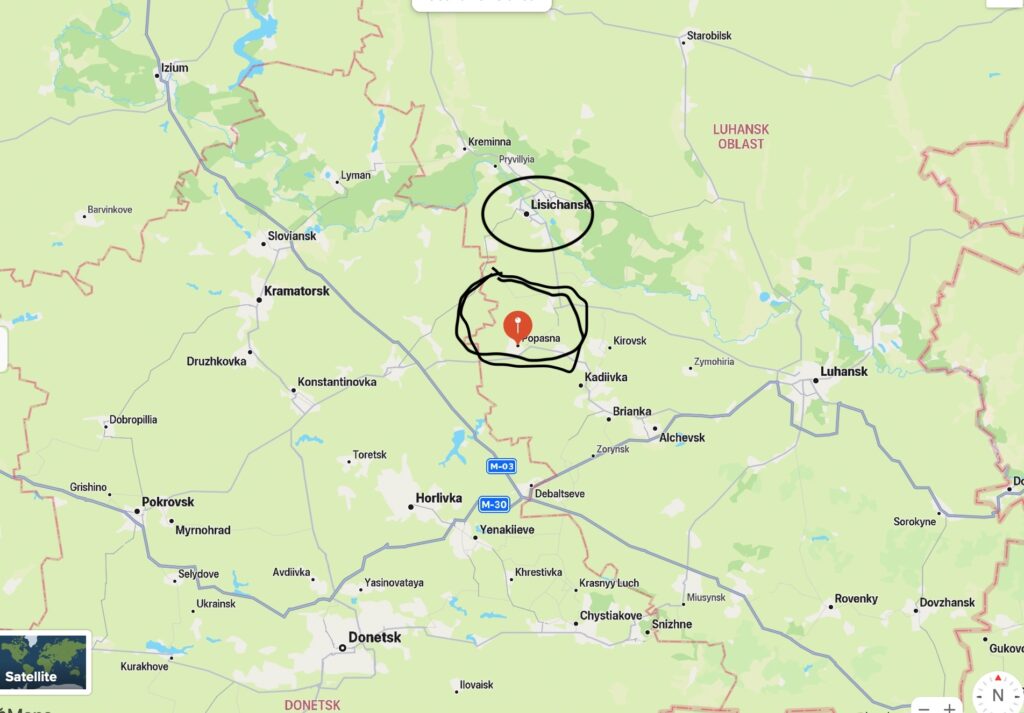 The city of Lisichansk is co-located with the city of Sieverodonetsk. There is a large Ukrainian army force dug in around Sieverodonetsk and they now face an increased risk of being cooked in a Russian cauldron when the troops that captured Popasnaya link up with Russian forces moving south from LYMAN (it is north of Kramatorsk).

This map provides a better overview of the location of the Ukrainian army (circled in yellow) and the movement of the Russian forces (red, what else?): 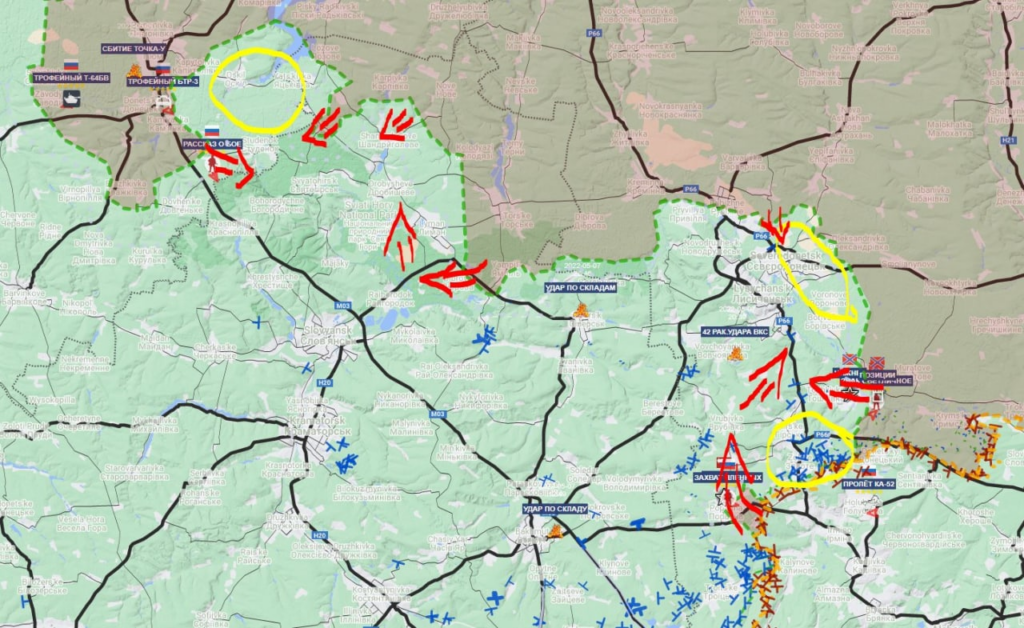 The Ukrainian units are not completely cut off. Some supplies have gotten thru but not enough to put Ukraine in a position to mount a credible counterattack. A key indicator to monitor in the coming week is whether these Ukrainian forces dig in or conduct a tactical withdrawal to the west.

One thing is clear–the fighting is brutal. The following video claims to show triumphant Chechen soldiers (they are Muslims) walking unmolested through the ruins of Popasnaya. They have no fear chanting, “God is Great.” I think their claim to have captured the city is credible because they are not being gunned down by snipers. If you look at the burnt-out high rises surrounding them, there are numerous places a stubborn Ukie sniper could hide.

Russian sources also published a video showing a “BEFORE” and “AFTER” status of a structure that housed members of the AZOV battalion. The young guys are upbeat and enjoying themselves. The muscular guy that comes out of door flexing his guns is shouting “WAR” AND “SUKA” “KILL THEM ALL”. The Russians claim he was “de-nazified.”

The Russians also continue to pound Odessa. The accompanying photo shows the smoking aftermath of at least three missile strikes:

Press reports out of Odessa indicate the missiles hit the airport and destroyed recently arrived NATO military equipment. That is not desperation. That is acting on a promise.

bs, the Ukrainian criminal gangs are super-capitalists with real muscle. Just listen to this pro-Ukrainian “influencer”, Snyatovskaya, voice her outrage at the theft. She names Mayor of Odessa, Anatoly Vorokhaev, as one of the profiteers:

At some point, the American people will awaken to the fact that our attempt to arm and feed Ukraine has enriched criminal gangs who could care less who runs Ukraine as long as they can profit. They know the value of a dollar and a ruble. War transforms a black market into a super market on steroids. In my experience, these black market activities are enabled by well-connected foreigners and corporations. This criminals always need a bank or tangible goods for storing their profits. Follow the money.