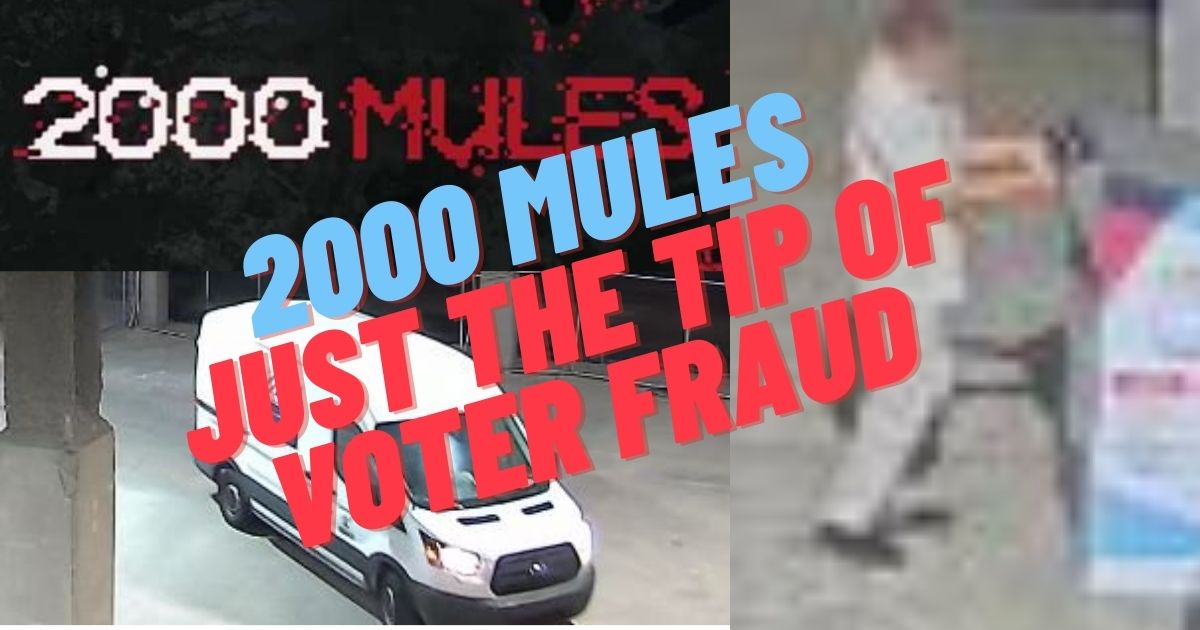 What is overlooked by many, though, is that there is much more voter fraud evidence from the 2020 election emerging.

Patriot Joe Brandis, who has been investigating Michigan voter fraud since the 2020 election with Michigan Citizens for Election Integrity says, “this is just the tip of the iceberg of voter fraud evidence that is emerging every week, and what’s about to come.”

The Gateway Pundit reported on a wide variety of eyewitnesses who observed fraud just in Michigan. Many of those observers mentioned a very suspicious 3:30AM Biden Ballot Dump of votes in Detroit at the TCF Center where absentees were being counted.

The Big Steal Deniers wasted no time in supposedly ‘debunking’ the white van that witnesses observed on election night.

The problem with the latest Big Steal Denier narrative is, it still doesn’t explain the math of the ballots that showed up in a suspicious late-night van.

With the video from Zuckerberg drop boxes reviewed, the 3:30AM TCF van is filled with ballots that can’t be explained according to investigator Brandis.

Much less can the media shills explain why there were TWO van deliveries, another one an hour later at 4:30AM to the TCF Center. The Big Steal Deniers had a workable fakenews narrative for a while, until the Gateway Pundit went for the security camera footage from Detroit. They tried to deny the request by quoting $22,000 for the footage.

TGP Publisher Jim Hoft published this exclusive after he and Cassandra Fairbanks reviewed the footage and blew up the entire mainstream narrative. When Hoft posted the article on Twitter, which is the video proof of the Biden Ballot Dump, it was the final election fact that got Hoft permanently banned from Twitter because he violated the “civic integrity policy.” For a while Twitter banned the vote fraud van saying video of the van was ‘nudity’ or ‘sexual’ in nature. This white van clearly delivering ballots was noticed right away by Patriot Shane Trejo who went and alerted the Republican Party attorneys that Detroit was about to steal another election through absentee fraud. Trejo was the Paul Revere of voter fraud that night.

DETROIT SAYS ONLY 16,000 VOTES IN LATE-NIGHT BALLOT DUMP THAT MEDIA LIED ABOUT FOR MONTHS

But Patriot Joe Brandis notes Michigan added 149,000 votes for Biden at 6:31am the day after the election, where 94% of the votes were for Joe Biden. Where did those votes come from if most of the other counties had already reported their final totals by 8:00PM on election night?

The Big Steal Deniers are now saying that it was all just late-arriving absentees though! They dropped all their gaslighting about the van being fake, food, camera equipment. But they say that it’s just legal late ballots without doing any other investigation.

The Big Steal Deniers simply take government PR flaks at their word. They ask Chris Thomas if he stole the election for Biden and report that it’s ‘debunked’ when he lies and says no. They don’t perform any journalism, they just repeat the talking points.

VIDEO EVIDENCE NOW PROVES THAT THERE’S NO WAY TO ACCOUNT FOR EVEN 16,000 LATE-NIGHT BALLOTS

Jessy Jacob said the Zuckerberg drop boxes were cleared every hour. Patriots in Michigan have reviewed the video from 19 drop boxes and estimate that no more than 61 total votes are observed being picked up at the 19 boxes they have reviewed video from, an average of 3 per box in the last hour. The most ballots observed collected from any single box was 13. That same rate, across Detroit’s 30 drop boxes, only yields 90 last-minute drop-box absentee ballots being picked up at 8:00PM.

In addition to the Zuckerberg drop boxes, there were also 23 “Satellite Voting Centers” where voters could drop off ballots in Detroit. Witnesses relay that roughly the same number of people voted there as used the drop boxes. That explains 69 additional votes.

The number of same-day registrants who voted in the Wayne County Clerk’s office was 455 on November 2nd and 1,471 on November 3rd.

The counting boards counted ballots in batches on election day, where they counted the absentees first, the in-person votes second, and then counted the remaining ballots from that day last. There is no large batch of ballots that accounts for the late-night surge of Biden votes.

THERE IS CERTAINLY NO SOURCE OF BALLOTS THAT WOULD EXPLAIN TWO LATE-NIGHT BALLOT DUMPS AT THE TCF CENTER AT 3:30AM and 4:30AM

This means the only total of last-minute absentees arriving by van should have been 2,016 at most, assuming all the same-day voters on election day weren’t counted until after polls closed.

Yet Detroit’s Senior Advisor to the City Clerk Chris Thomas admits there were 16,000 votes in the 3:30AM Biden Ballot Dump. By his own admission and the available evidence, where did the extra 16,000 come from?

At the 3:30AM Biden Ballot Dump, there were somewhere between 52-60 boxes brought into the TCF Center. Those boxes can hold an estimated 350 ballots at most, accounting for the 16,000 number given by Detroit’s Thomas. But then where did the rest of the ballots posted at 6:30AM come from, since other counties had already reported their totals?

Biden posted 149,000 suspicious Michigan votes at 6:30AM that were 94% in his favor. Detroit claims they only brought in 16,000 of those, of which 16,000 can’t be reasonably explained. And where did the other 131,000 votes in Michigan come from since other counties had already reported all of their voting the evening before?

There were 600 Zuckerberg drop boxes installed across the state of Michigan. Detroit had 23 Satellite Voting Centers.

Detroit had at least one “Relia-Vote” machine parked at the Department of Elections according to voter fraud investigator Phil O’Halloran. There was no public right to review the process at the Department of Elections, as citizens do not have the right to review the signature verification process. This machine allows users to manufacture a replacement ballot. It is essentially a ballot-printing machine.

DETROIT HAD ACCESS TO A MACHINE THAT WOULD REPRINT BALLOTS

Dominion Whistleblower Mellissa Carone reported that she saw Dominion officials panic at 11:30pm on election night and claim there was a ‘data loss’ and they had to head over to the Department of Elections. To her credit she has consistently and reliably said that same story from the day after the election onwards. Were the Dominion workers sent there to ensure that the proper ballots were printed on the Relia-Vote machine to ensure a Biden victory, to create the paper record of ballots?

What else accounts for the 7.5 hour time delay getting late-arriving absentees from the Department of Elections to the TCF Center, a 6 minute drive?

Biden won Detroit, according to the mainstream sources, by 94%. Detroit is 77% Black and 14% White. Yet national exit polls show Trump getting 12% of the Black vote and 58% of the White vote. Trump received 12,654 votes from Detroit from the official totals, but based on trends from the exit polls, Trump should have received at least 30,000 MORE!

AT LEAST 30,000 MISSING TRUMP VOTES IN DETROIT BASED ON NATIONAL EXIT POLLING

Were those missing Trump votes overridden by Dominion machines, and then reprinted at the Department of Elections on a Relia-Vote machine, and then trucked over to the TCF Center to be counted at 3:30AM and 4:30AM?

The documentary 2,000 Mules shows what could be called ‘retail’ voter fraud. The kind of on-the-street voter fraud engaged in by Democrats in big city elections, and a tactic that Democrats have long been known for.

But what patriots witnessed in the 2020 election was systemic, wholesale, voter fraud. They witnessed machines that flipped votes, machines and clerks that always erred in favor of Biden and against Trump. Machines that were web-connected to provide a real-time view of voter results to unknown outside persons who were able to stop voting in multiple battleground states when Trump was ahead, and then resume it and magically find ballots that made Biden the front-runner.

When Democrat Garlin Gilcrest ran against Detroit Clerk Janice Winfrey in 2017, a late-night surge of absentee ballots delivered at 3:00AM changed the outcome from a Gilcrest win to a Winfrey win. Gilcrest, now the Michigan Lieutenant Governor, called it a ‘catastrophe’ at the time.

Why were there two van deliveries of ballots to the TCF Center in the middle of the night, at 3:30AM and 4:30AM, and where did those votes come from? 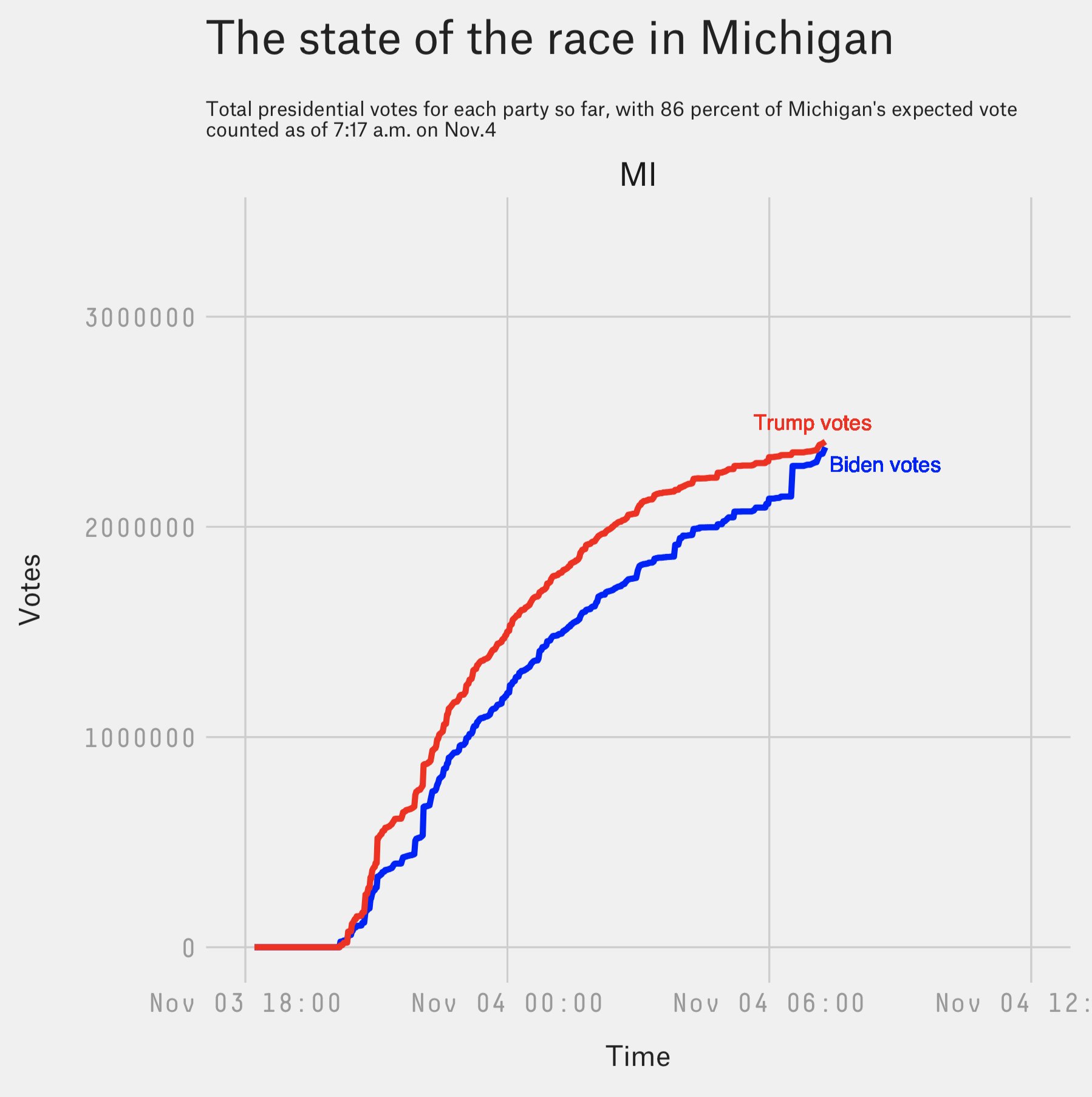