A majority of Americans want Joe Biden to secure the porous southern border with tougher immigration policies. But the will of the American people falls on deaf ears under the Biden regime.

Customs and Border Protection encountered 221,2020 migrants illegally crossing the southern border in March, marking a 22-year high as the Biden administration releases an unprecedented number of border crossers and illegal aliens into the U.S. interior.

The Department of Homeland Security warns as many as 18,000 migrants will flood across the southern border per day if Title 42 is revoked.

But the Biden administration has no plans to stop the mass illegal migration surge.

In fact, the Biden White House is “grateful” for the job Vice President Kamala Harris has done as border czar.

Jen Psaki says Biden has FULL CONFIDENCE in Kamala Harris’ ability to deal with the chaos at the southern border.

“He is grateful for her work in doing exactly that.” pic.twitter.com/S3DAeuwPcf

Asked during Wednesday’s briefing whether Harris could still be trusted to halt the influx of illegal immigrants, White House press secretary Jen Psaki touted Harris’s handling of the border crisis.

“A question about immigration. Does the president still have confidence that the vice president can get to the bottom of root causes of migration?” Fox News White House Correspondent Peter Doocy asked.

“He absolutely does,” Psaki replied. “And he’s grateful for her work in doing exactly that.”

“Why?” Doocey shot back. “What gives the president confidence when he sees that March 2022 has 28 percent more migrant encounters at the border than March 2021, when she got this assignment?

Psaki insisted the administration has addressed the root cause of migration by forging immigration agreements with Costa Rica and a partnership with Mexico to stem “irregular migration.”

“Addressing root causes means working with countries in the region to take steps to have regular partnerships and be able to have people sent back to the region as needed,” she said.

A plurality of Americans have an unfavorable view of Harris. Fifty-six percent of likely voters have an “unfavorable” view of the vice president, according to a Rassmussen survey conducted on March 27 and 28.  Forty-seven percent said they had a “very unfavorable” impression of Harris, while 9 percent viewed her ‘somewhat unfavorably.

Most Americans also want Joe Biden to implement tougher immigration policies. A new CBS News/YouGov poll reveals that 52 percent of Americans believe Biden “should be tougher on illegal immigrants, while just 27 percent say he is “handling things right” at the border. 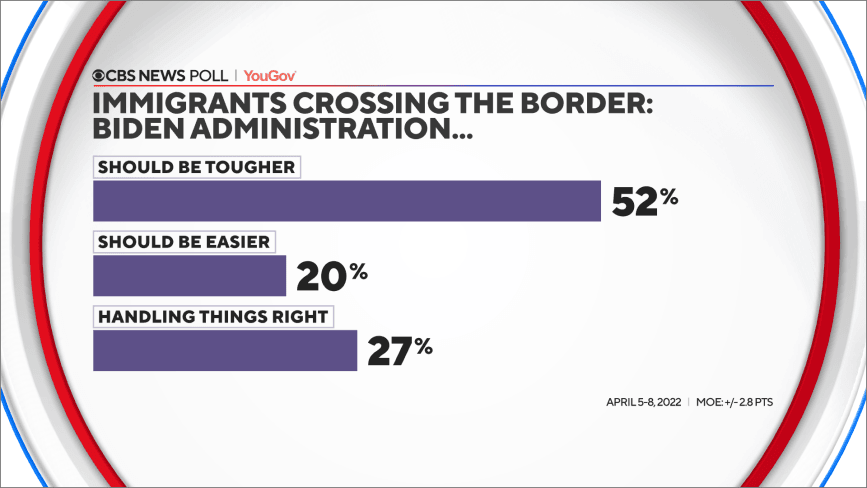