The elites are in deep trouble.

Victor Davis Hanson issued a stern warning to them about the backlash to the disastrous policies they have enacted.

Victor Davis Hanson wrote in American Greatness that the elites “will soon reap the whirlwind of an angry public.”

He pointed out that the American people are tired of the “incompetence, arrogance, and ignorance” of the elites.

In the November 2022 midterms, we are likely to see a historic “No!” to the orthodox left-wing agenda that has resulted in unsustainable inflation, unaffordable energy, war, and humiliation abroad, spiraling crime, racial hostility—and arrogant defiance from those who deliberately enacted these disastrous policies.

What will replace it is a return to what until recently had worked.

Closed and secure borders with only legal and measured immigration will return. Americans will demand tough police enforcement and deterrent sentencing, and a return to integration and the primacy of individual character rather than separatist fixations on the “color our skin.”

The public will continue to tune out of the partisan and mediocre “mainstream” media. We will see greater increased production of oil and natural gas to transition us slowly to a wider variety of energy, strong national defense, and deterrent foreign policies.

The prophets of the new world order sowed the wind and they will soon reap the whirlwind of an angry public worn out by elite incompetence, arrogance, and ignorance.

As the elites become less popular, President Donald Trump has become more popular. Trump is currently the most popular US political leader.

He is more popular than the radical left and RINOs. 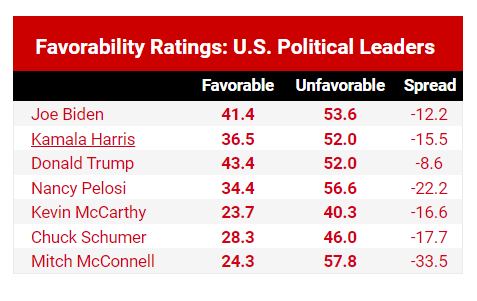