CBS “60 Minutes” aired a segment Sunday night about the Wisconsin 2020 election. Within seconds it becomes clear that reporter Bill Whitaker had been assigned one goal: Discredit the recent election investigation by the Office of Special Counsel (OSC) conducted by former WI Supreme Court Justice Michael Gableman.

The segment was produced by Marc Lieberman and Cassidy McDonald (pictured below), recently hired from China. You would think the story was created by corrosive Media Matters, who purposely tear our country apart. Both producers should be reprimanded for what aired, and worse.

The hardcore leftists at “60 Minutes” refused to report the facts – something we are used to as honest American news consumers.  60 Minutes refused to report on the nursing home fraud, the stealing of votes and elderly abuse,  the picnic drop boxes or any of the discoveries presented in the Special Counsel report.  And therefore, they ie to their gullible audience. Other than “Zuckerberg grants”, Whitaker mentions NO OTHER EVIDENCE from the OSC Second Interim report. Wisconsin residents and other informed Americans have to be asking themselves this question. Did Bill Whitaker and the producers even read this latest report? Did they watch Judge Gableman’s three-hour presentation from March 2nd? If the answer is yes, then those who watched this 60 Minutes segment witnessed journalistic malpractice in its most corrupt form. They lied by hiding the truth. CBS News deliberately created a “fake narrative”. The next question is why? Who put them up to this?

The overall narrative from 60 Minutes is that Wisconsin Election Commission (WEC) and other election officials really had no choice but to make radical election changes without the consent of lawmakers. The Administrator over the WEC is Meagan Wolfe. She says” Gableman is revising history” by making those illegal election changes seem sinister. She says OSC is trying to “weaponize misinformation to mislead people for partisan purposes”. Her hypocrisy is out of this world! She’s on a media show purposely deceiving the public, about an investigation she says misled and misinformed the public. 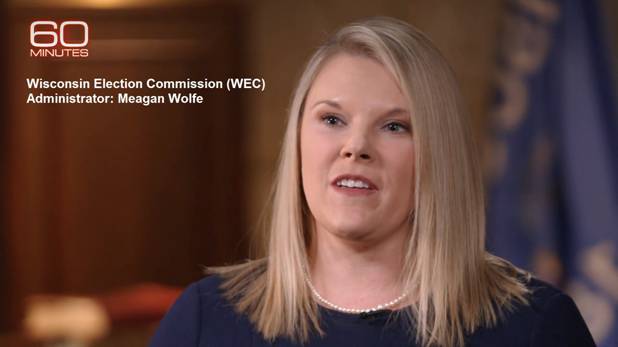 We do get an unusual surprise with 60 Minutes. Not one legitimate member of the Wisconsin Republican Party would speak with the discredited and biased 60 Minutes. It’s laughable watching Whitaker have to repeat over and over “he declined our request for an interview” or “they ignored our requests for interviews”, and so on.  But the fake news media will always find a RINO in despair.

State Senator Kathy Bernier was their spoiler, only because she’s a Republican. She was previously a County Clerk overseeing elections. Apparently, she’s conditioned to expect fraud in elections so she sees no issues from 2020. The leftist media have been providing her a platform to disparage the investigation, well before any results were published. She’s become a chump to the left, and laughing stock to WI residents. She can’t win another election so she’s getting out of politics, retiring in January. They ask Bernier: “Was the 2020 vote in Wisconsin clean and fair? Bernier says: “Yes. The election was not stolen from Donald Trump.” The Sunday segment introduces the fourth evolution (below) from CBS News about election fraud in America. Ten years from now CBS will probably move the goal post even farther, maybe something like: “There were more legal ballots than fraudulent ballots, so the election was fair.”

Bill Whitaker purposely rebrands WEC in the interview, calling it the “Bipartisan Election Commission”. Numerous times he insinuates any issues are the fault of Republicans because they created the rules, laws, and policies. To justify the ballot drop boxes and other illegal changes, Whitaker says “WEC had to make snap decisions, reinterpret election laws to fit unprecedented (Covid) circumstances”. If so worried about election staff and voters, why import a lawyer from the Covid capital of the world (NY) to run Green Bay’s election? Michael Spizter Rubenstein flew back and forth many times.

He says it was all done with transparency. But then he never asks Meagan Wolfe (WEC) why this supposed transparency stopped after the election. Why does WEC refuse to cooperate with State sanctioned subpoena’s and the OSC investigation? It’s a travesty how the local Wisconsin media, and now national media have attacked the OSC investigation, Mr. Gableman, and elected officials defending the investigation. Judge Gableman is deeply concerned about the media in America. He said: “In Wisconsin, there are just a couple of radio shows, and a few smaller websites that are truth-tellers. They are not beholden to Gannett, the New Media Investment Group, or other conglomerates that utilize ideological reporters to push an agenda. This needs to change in America.”

With today’s national media “the talent” are no longer investigative reporters with integrity. They are figureheads reading teleprompters with predetermined corporate narratives. The 60 Minutes producers should have put this one easy question on Bill Whitaker’s cue card to ask Wolfe or Bernier: In the 5 years leading up to the 2020 election, WEC had the ability to obtain 240 report files from ERIC to clean Wisconsin’s voters rolls – Why did they only ask for 3? Bammm!