The current fearmongering about a supposedly imminent Russian invasion of the Ukraine is a clumsy but convincing piece of propaganda. Remember how the media helped beat the drum to justify a needless, costly war with Iraq in 2003? This is the same damn thing.

Let us start with this fact–Belarus announced on December 2, 2021 it would be conducting a military exercise on Ukraine’s border:

According to the head of state, the Belarusian-Russian exercise will be held in two stages. The first one will begin in the “next few months.” “We are still making plans, but the first stage will definitely be held in the winter. Everything is ready for this,” the president said. “They will certainly huff and puff over there but we will conduct the exercise. We will be reinforcing that part of the border.”

Russia and Belarus made an additional announcement on December 29, 2021 that they would be conducting a joint military exercise in February or March in response to NATO military activity in the region:

Belarus on Monday announced joint military drills with close ally Russia on its southern border with Ukraine and accused the NATO military alliance of building up offensive capabilities near its borders.

U.S., NATO and Ukrainian officials say Russia has built up forces near Ukraine, sparking fears of a looming attack. Moscow denies any such plan. Belarus is itself locked in a row with the European Union over migrants camped at its western border.

Casting it as a response to new military deployments in countries to the west and south of Belarus, Defence Minister Viktor Khrenin said Minsk would hold an exercise with Russia in the “medium term”. He gave no specific date.

“We see troop formations around our state borders… We can only be concerned by the militarisation of our neighouring countries, which is why are forced to plan measures in response,” he said in comments on his ministry’s website.

I cannot recall a single example from history where a country intent on invading another did so by publicly announcing massive military exercises. Why give your potential foes a heads up? Better to do what the Japanese did at Pearl Harbor–sucker punch your enemy.

For example, I recently learned that analysts covering the so-called Russian build-up on Ukraine’s borders are giving the classified intelligence more credibility because they are seeing similar information on the unclassified social media platforms.

One popular platform is #OSTINTTECHNICAL on Twitter. One of the contributors to this account is Kyle Glen: It would be useful to know the source of funds that keeps osintTechnical up and running. It appears to be a 24 hour a day operation judging from the flood of tweets. Clearly not the work of just one man. Moreover, the metadata in the images posted at that site reflects the type of image collection that an intelligence organization would produce.

This is not just a group of guys and gals who just happen to be in the right place at the right time to snap some photos with their iPhone.

I believe there is another political aspect to this charade–gin up fear about an imaginary invasion and then, when it does not materialize, credit the wisdom and bravery of Joe Biden for compelling Vladimir Putin to back down.

All of this Kabuki theater does not erase Russia’s primary concern–they will not allow NATO to boost its presence and deploy sophisticated weapons systems on its western borders. Western bombast about defending “democracy” in Ukraine is a cover based on a lie. Describing Ukraine as a “democracy” is akin to describing the village hooker as a virgin. But Ukraine and the hooker share one thing in common–they’ll go with the person or state willing to pay the most for their services.

The Biden team’s incessant warnings of an imminent invasion is wearing thin. It is a modern version of the boy who cried wolf. The only saving grace is that media credibility is at an all time low. Few read the NY Times or Washington Post or watch cable shows that make tabloid journalism appear respectable. Nonetheless, print and electronic media are eagerly hyping the dire warnings from the Biden (USA) and Johnson (UK) governments about an invasion that is actually a previously announced military exercise.

The following tweets were posted by Emery Emery starting on Feb 15, 2022. None proved to be correct.

I am predicting that Putin will attack Ukraine within 7 hours. Forces will begin bombing Kiev no later than 9:30am Wednesday morning. I cannot reveal the source of this knowledge.7:30 PM · Feb 15, 2022·Twitter for iPhone

I am predicting that Putin will attack Ukraine within 7 hours. Forces will begin bombing Kiev no later than 4:30pm Wednesday. I cannot reveal the source of this knowledge.2:30 AM · Feb 16, 2022·Twitter for iPhone

I am predicting that Putin will attack Ukraine within 7 hours. Forces will begin bombing Kiev no later than 3:30am Thursday. I cannot reveal the source of this knowledge.1:30 PM · Feb 16, 2022·Twitter for iPhone 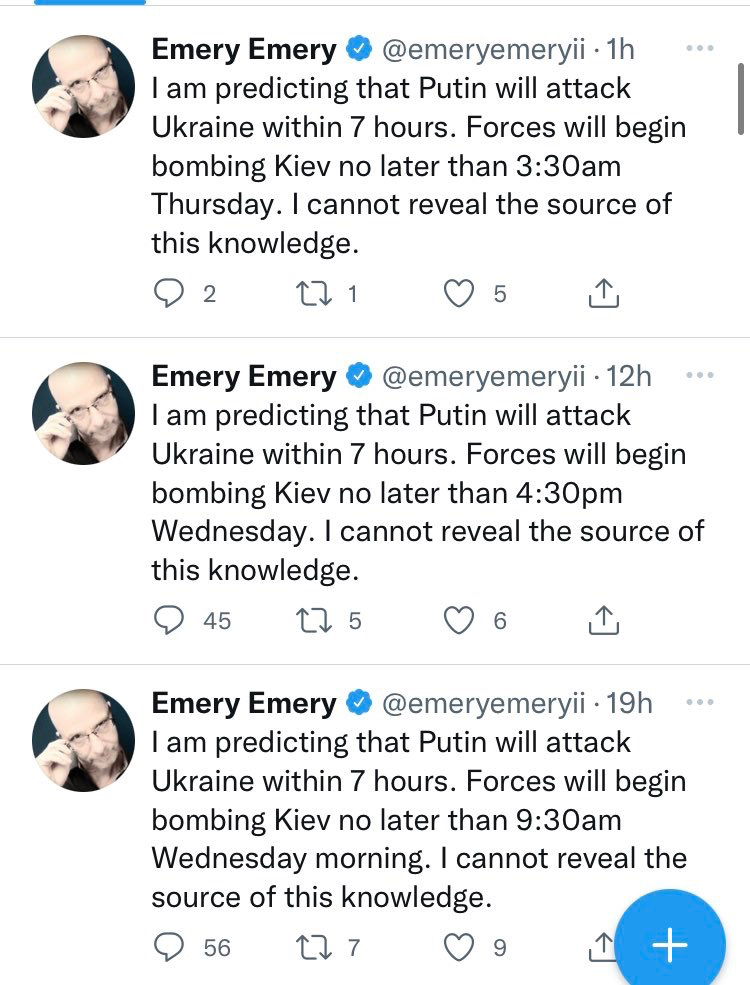