LCpl. Jared Schmitz was killed by a suicide bomber in Kabul on August 26th. Schmitz and 12 other American heroes were killed by an Islamist bomber while assisting Americans and Afghan allies at the city airport in Kabul. Over one hundred Afghans were also killed in the enormous blast.

on Wednesday LCpl. Jared Schmitz returned home to St. Louis and Wentzville in his final journey. 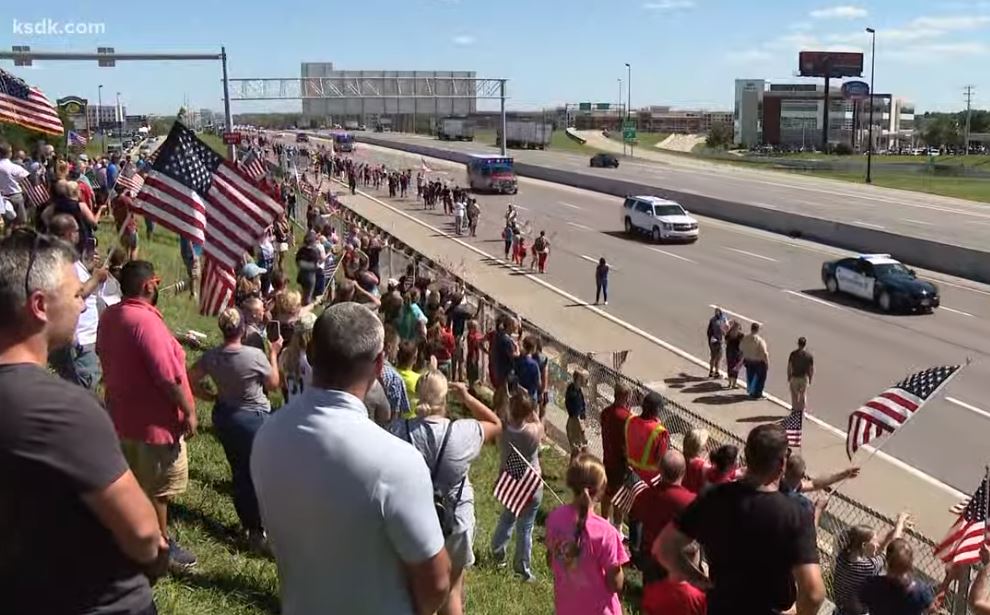 The response from the local midwest community was enormous.

Cars are already lining up to greet the body of fallen Marine LCPL #JaredSchmitz as he returns home. #semperfi #KabulAttack pic.twitter.com/N6qDJYesgm

Look at the response from the Patriot Guard bikers!

The Patriot Guard has gathered here at the airport ahead of LCpl. Jared Schmitz’s arrival. They will take part in the escort down I-70. We have a live report coming up at noon on @KMOV. pic.twitter.com/oANjo8Jalm

The motorcade procession for Marine Lance Corporal Jared Schmitz has made its way on westbound 70 to Fee Fee. pic.twitter.com/HYWgC3AeC3

Displays are already going up along overpasses across St. Charles County to honor the life of LCpl. Jared Schmitz. @KMOV pic.twitter.com/EPoL4AklbV

Amazing show of support for Lcpl Jared Schmitz! There are cars lined up all over interstate 70 and multiple first responders on overpasses with aerial fire trucks with the American flag raised. pic.twitter.com/iiFjqZvCus