The newly appointed judge had another challenging issue yesterday in the Arizona court.  One of the presenters who argued for the Democrats’ was a partner at the law firm Judge Martin worked at while Martin was there.

Yesterday morning we reported that the top judge who appointed Judge Martin to the case on either Sunday or Monday is the wife of one of the five Maricopa County Board of Supervisors (MCBOS), Bill Gates.  These same Supervisors have done all they could to stop the audit in Maricopa County from ever occurring.  It appeared that Bill Gates got the judge he wanted.

A hearing was held yesterday and Judge Dan Martin ended up allowing the audit to continue but demanded the auditors release their audit policies.  The policies might be what the Democrats wanted the entire time.

But one thing we noticed in yesterday’s trial was the presentation of an individual in the case.  This man worked with Judge Martin in the past at Brown and Bain.

Attorney Daniel Barr with Perkins Coie presented at the hearing yesterday as an intervenor: Barr (First Amdmt Coalition): Cyber Ninjas has provided no facts/affidavits/etc to back up their claim that they are trade secrets that should be under seal. Circular argument: “Because they says its so.”

The Barr argued the following base on individuals watching the case on Livestream:

Barr argues that the CN don’t make a strong enough argument to seal their procedures. “I find it fantastic to believe there is legislative privilege involved in the security of the ballots or election machines.” So do I. -KC

But what we uncovered about Mr. Barr is he is a partner of Perkins Coie and also was a partner at the company Judge Martin worked at, which merged with Perkins Coie.

But according to a document we found on the Wayback machine, Mr. Barr was with Brown and Bain which merged with Perkins Coie.  Barr was a partner since 1992 at that company. 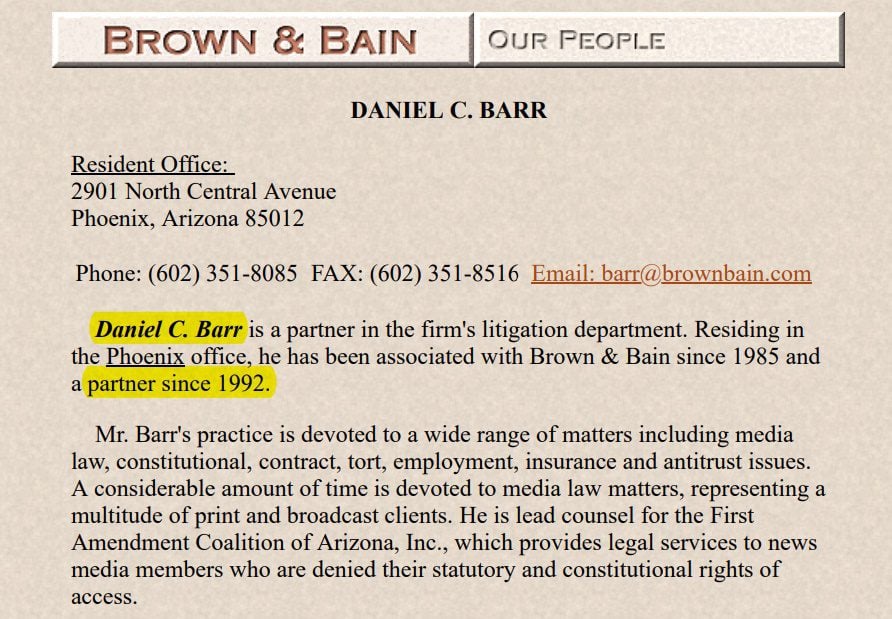 This happens to be the same company Judge Martin worked at starting in 1992:

This means that a partner at the former law firm Judge Martin worked at was there when the Judge was there.  The same guy presented in yesterday’s case in front of Judge Martin.  This too smells like something that needed to be announced or dealt with at yesterday’s trial.  Was this another potential conflict of interest?