US Rep Devin Nunes, Ranking Republican on the House Intel Committee, provided a list of individuals that the Republicans would like to interview in the sham Democrat impeachment hearings.

One requested witness is the corrupt son of the corrupt former Vice President Biden, Hunter Biden.

The Democrats have denied this request, calling it a ‘sham’.

As the Democrats move forward with their insane impeachment hearing in the House, the levels of insanity reach new levels.

The Democrats created an impeachment process where the individual leading the process was involved in creating it with a CIA spy who leaked information from a Presidential call.  The CIA spy was kicked out of the White House in 2017 for leaking.

The whistleblower form in the Intel community was updated to allow for second hand information.  This was not allowed before this complaint.   The Inspector General (IG) of the Intel community is involved in the Russia witchhunt.  He worked in the DOJ and was involved in the fraudulent filings of FISA warrants.  He then moved to his IG position and allowed for the complaint from a CIA spy who was kicked out of the White House for leaking.

Schiff and his team flew to the Ukraine before the complaint and met with some of the individuals who testified in Schiff’s court held in the basement of the US capital.  The Republicans are not allowed to bring in witnesses.  The witnesses are coached by Schiff.  The Republicans’ questions are constantly interrupted by the likes of ‘President’ Swalwell, a failed Democrat candidate for President, and other Democrats.

The President and his team was not allowed to interview the witnesses.  The witnesses are basing their testimonies in some cases on 4th hand information.

Schiff is in charge of the impeachment hearings set up based on the CIA spy’s complaint.   Schiff is the same individual who created the incident that the impeachment is based on.  All rules and guidelines are created by him alone.  He decides who interviews and when and what they are allowed to say.  He tells witnesses whether they are allowed to answer questions or not from the Republicans on the Committee.

The whole SHAM is based on the President requesting the new President from the Ukraine to look into the 2016 campaign.  The President asked that Ukraine leader see if he could find anything on Hillary’s server, which some people believe may be in the Ukraine, as well as Crowdstrike, the Ukrainian owned firm that the FBI and DNC relied upon in 2016 when it claimed that Russians hacked Hillary’s emails.  Crowdstrike’s claim to this day is the only information used by the FBI, DOJ and Mueller team as evidence that the Russians hacked Hillary’s emails.

The President of the Ukraine asked on the call whether he should look into the Bidens’ actions in the Ukraine.  A video where the former Vice President bragged about having a Ukrainian prosecutor kicked off a case where he was investigating his son, Hunter Biden, was shared all over the Internet.  The judge was removed in a quid pro quo arrangement.  The Ukrainians removed the prosecutor and then they received $1 billion from the US.

Biden’s son Hunter, was placed on the Board of Burisma Holdings in the Ukraine and he and Devon Archer, who’s connected to former Secretary of State, John Kerry, who was also on the Burisma Board, made $50,000 a month each in spite of knowing nothing about Burisma’s business.

The Republicans on the Intel Committee want to interview these two young Burisma Board members. These two were included in the list of nine individuals currently on the Republican’s list.  Below is the letter to Adam Schiff requesting these testimonies – 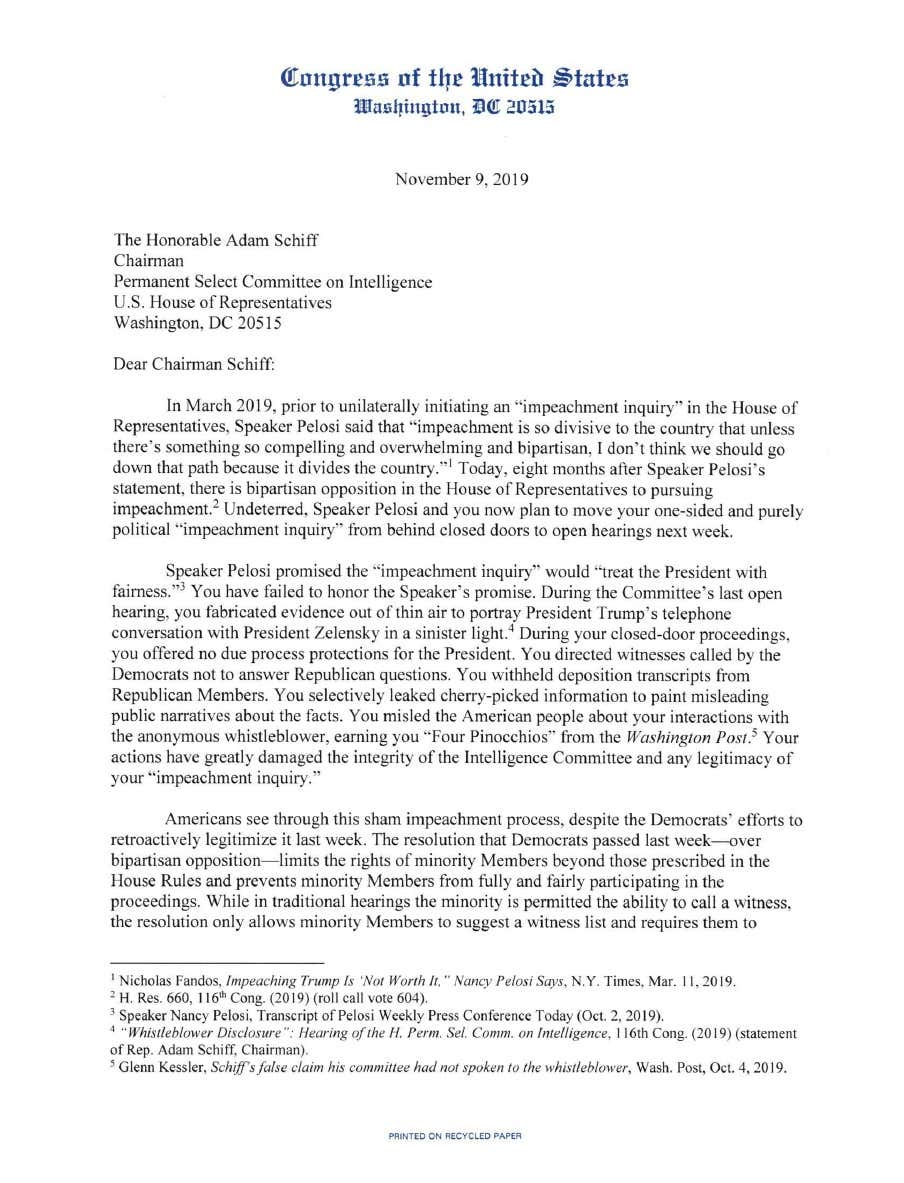 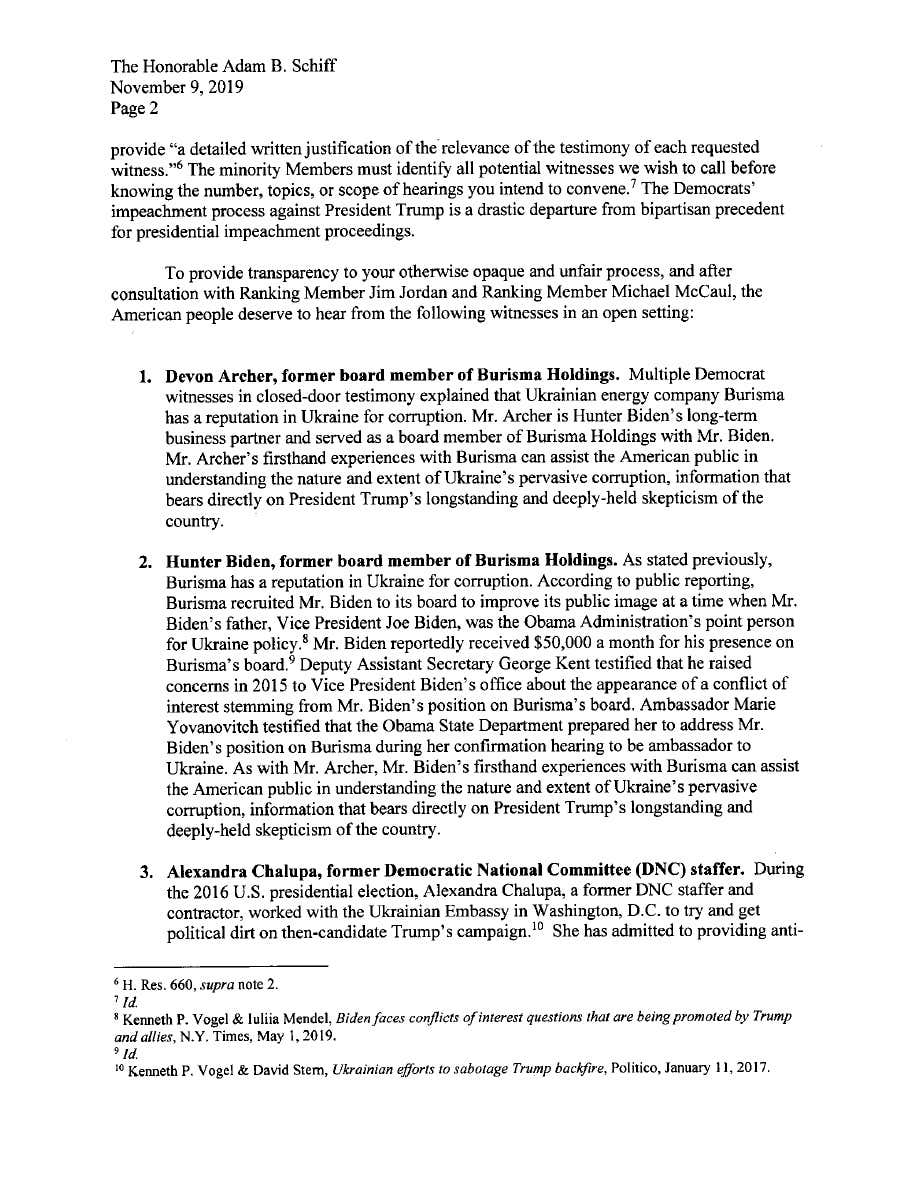 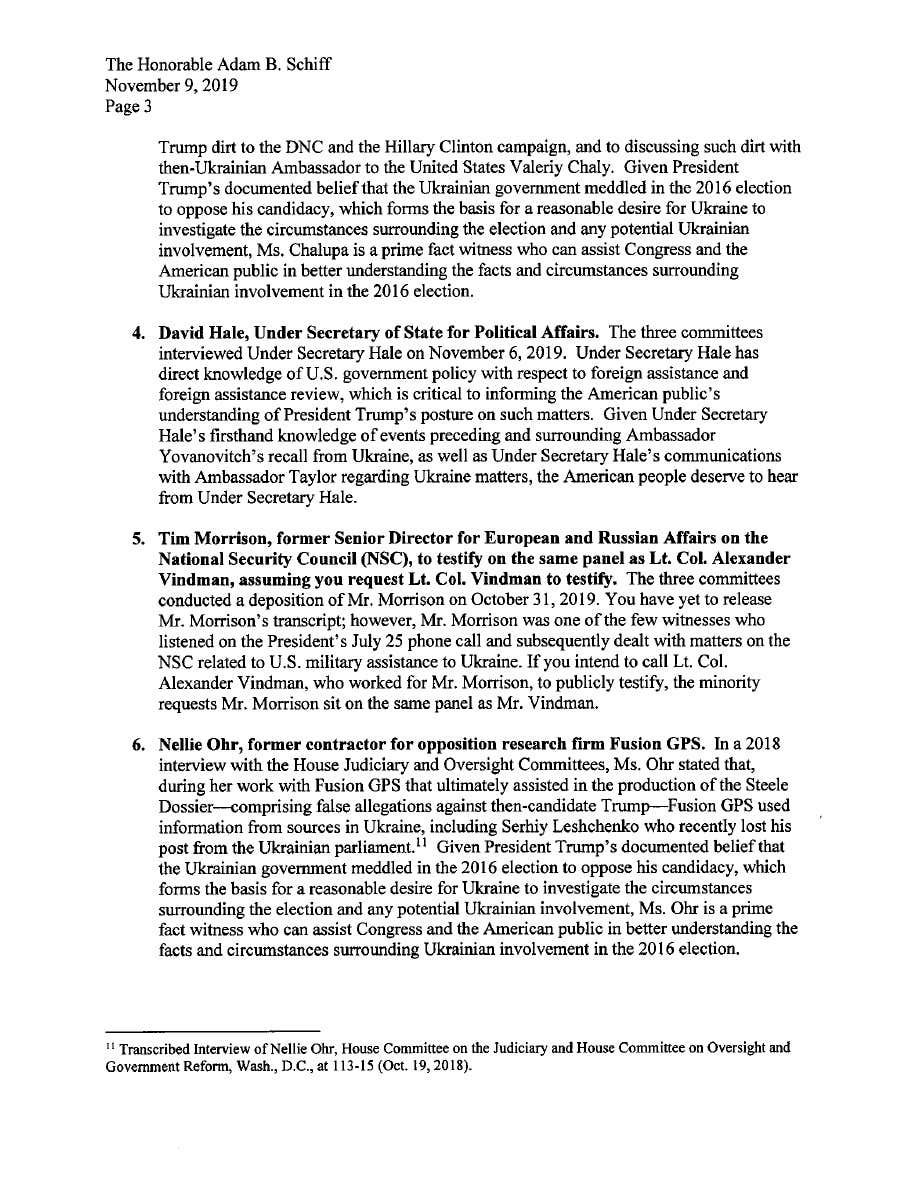 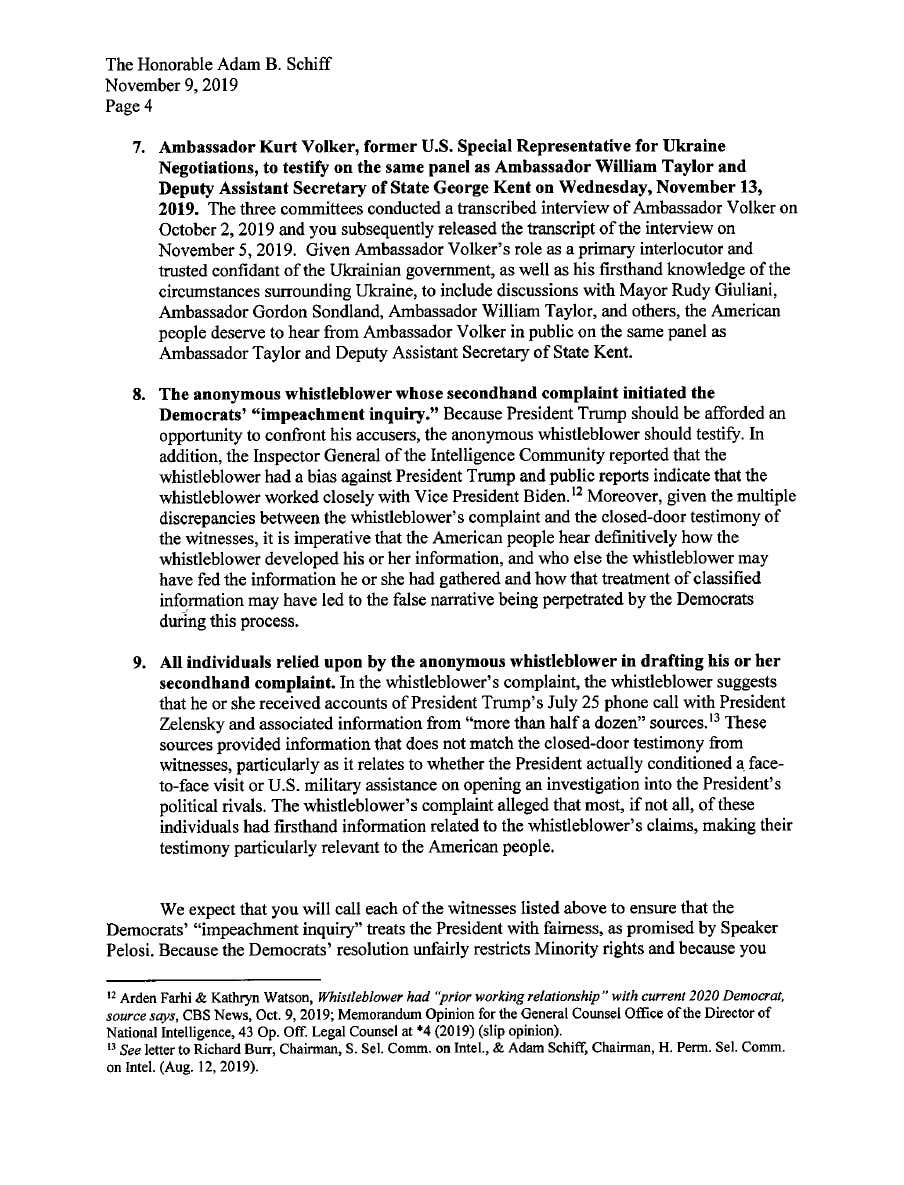 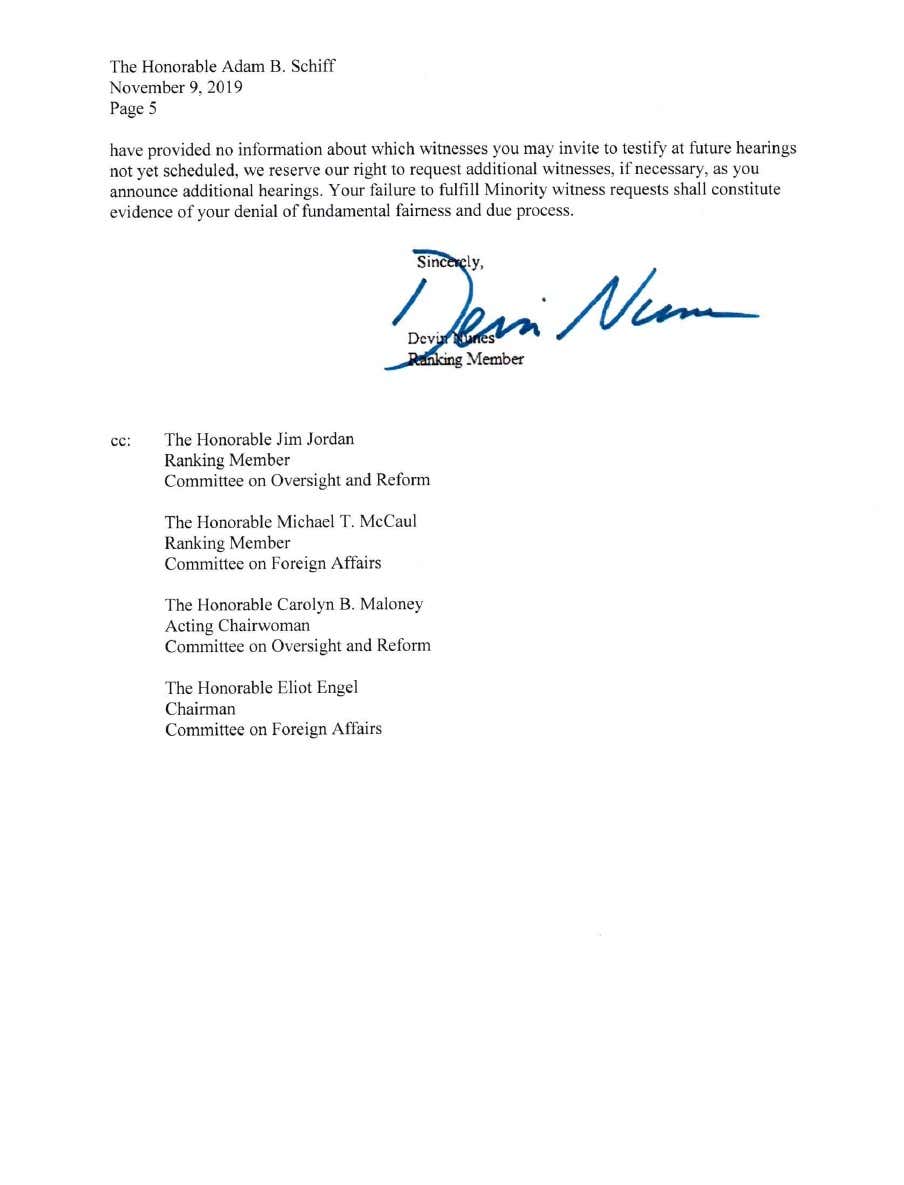 Per news late Sunday night, in less that 24 hours, the Head of the Impeachment sham, Shifty Adam Schiff had already denied the Republican’s request saying it won’t probe “sham claims” –

In response [to Nunes’ memo], Schiff confirmed that Biden will not be testifying but agreed to review the rest of the Republicans’ list. “This inquiry is not and will not serve as a vehicle to undertake the same sham investigations into the Bidens or 2016 that the President pressed Ukraine to conduct for his personal political benefit,” the top Democrat said, according to The Washington Post, “or facilitate the President’s effort to threaten, intimidate, and retaliate against the whistleblower who courageously raised the initial alarm.”

The Democrats are making up a sham investigation not based on the law that they think they can get away with.  We, the American people, won’t let them!