For the first time since 2009, an Italian ship has returned migrants from the high seas to a Libyan port, an operation which has enraged open borders NGOs and which is likely to bring strong rebuke from international bodies.

The UNHCR (United Nations High Commission for Refugees) has already announced the opening of an enquiry following Monday’s events, which saw an Italian registered supply ship rescue 108 migrants from a vessel in distress, delivering all aboard to Tripoli on the instruction of the Libyan navy. Since late June, the management of Libya’s SAR (Search And Rescue) zone has been the responsibility of the Libyan navy. The zone extends beyond the country’s territorial waters, covering a maritime area where traffickers’ boats have been met by NGOs, and migrants transported to ports on the European mainland. 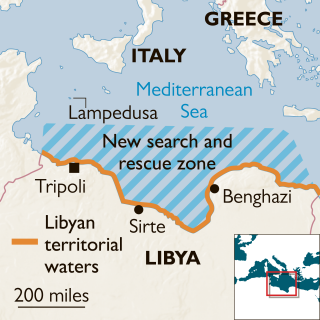 ”No words are enough to describe the outrage we are feeling at the moment!”, French NGO Watch the Med – AlarmPhone announced Monday evening, describing the event as the ”first push-back in years” by an Italian vessel.

”We are shocked!”, claimed Berlin-based NGO, Sea Watch; ”Yesterday, the Italian ship Asso Ventotto brought rescued persons back to Libya in violation of the Geneva Convention on Refugees and the European Convention on Human Rights.” The group insisted that the EU evacuate the migrants to Europe ahead of any legal decision which may follow from the European Court of Human Rights.

”The NGOs are protesting and the people smugglers are losing their business? Good, we’ll continue like this!”, he announced in a Facebook status peppered with smiley face emojis, adding confidently that the Italian coastguard had neither coordinated nor participated in the operation, in spite of claims by a ”foreign NGO” and an ”ill informed left-wing deputy.”

Salvini was referring to Nicola Fratoianni, an Italian left wing deputy currently on the Mediterranean with Spanish NGO Proactiva Open Arms. Fratoianni had suggested that the Italian coastguard may have been involved in Monday’s operation.

”We are collecting all the necessary information on the case of the Italian tug, Asso Ventotto, which reportedly took back 108 people rescued in the Mediterranean to Libya,” UNHCR Italia said, Tuesday, via Twitter. ”Libya is not a safe haven and this act could result in an infringement of international law.”

Echoing the UNHCR, the Council of Europe recently stated that “no European ship can bring migrants back to Libya because it is contrary to our principles.”

The owners of the Italian vessel, Augusta Offshore, have confirmed that their supply ship had rescued the migrants in proximity to an oil and gas platform some 57 nautical miles from Tripoli, and that the operation was coordinated by the Libyan coastguard.

”I promised to defend the borders, I am doing it with all the energies and means that are possible to me”, ‘Italians First’ proponent, Salvini, tweeted on Monday, explaining that after just two months in power, his government’s policies were seeing results.

As Italy begins to see a return to order, neighboring Spain is experiencing a significant upsurge in migrant arrivals, with multiple landings along its southern beaches in recent days. Some 1,400 African migrants arrived this past weekend, according to the ”overwhelmed” Spanish coastguard, dozens of boats arriving each day along the country’s southern coastline. Pressure is also building in the Balkans, in particular Bosnia, where large numbers of mainly Middle Eastern migrants are waiting to cross into Western Europe via Croatia and Slovenia.

”Trump also recognizes the work that our government is doing on immigration, citing Italy as an example to be followed in Europe in the defense of borders”, he wrote.