Former PLO operative Rashid Khalidi was all over the news  for a party Barack Obama attended in his honor back in 2003.
…The same party where they were bashing Israel and Obama gave a toast to his dear friend Rashid.

The news was very damaging to Barack Obama.

That’s when Wikipedia jumped into action.

Wikipedia jumped into action and locked Rashid Khalidi’s page until after the election! 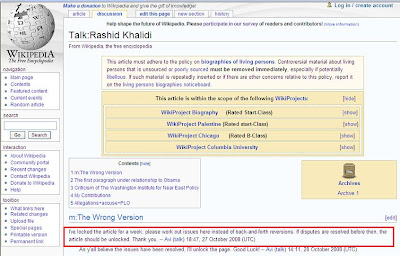 I’ve locked the article for a week; please work out issues here instead of back-and-forth reversions. If disputes are resolved before then, the article should be unlocked. Thank you. — Avi (talk) 18:47, 27 October 2008 (UTC)