The snow-covered Col de l’Échelle mountain pass – a crossing point between Italy and France – was today the scene of the latest high-profile operation by activists from France’s Génération Identitaire (Generation Identity) as the Franco-Italian border was symbolically closed-off to migrants.

In the action notable for its slick branding and logistics, roughly a hundred volunteers in snow shoes hiked up the pass, unveiling a gigantic banner declaring that the border was closed. Simultaneously a make-shift fence was erected along a length of the pass while two chartered helicopters and a small plane bearing the group’s branding began surveying from the skies. 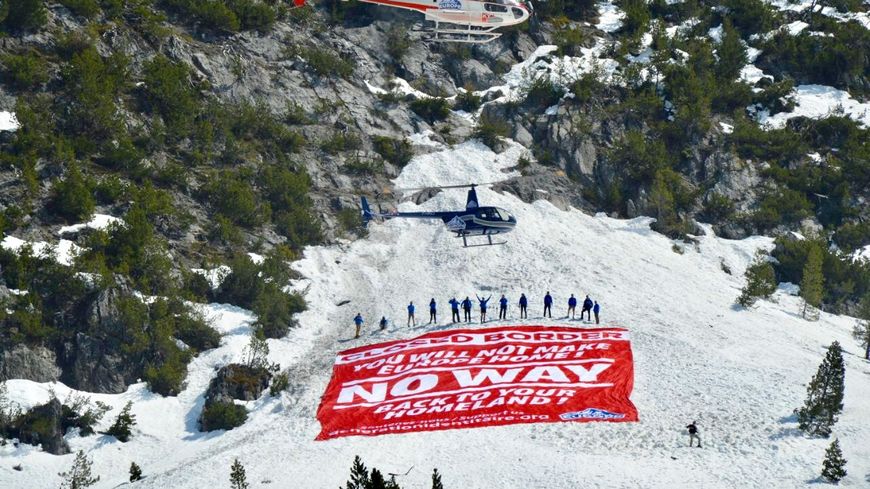 A spokesperson for Génération Identitaire revealed to the Gateway Pundit that it plans to remain in place at least several days to guard the mountainous pass which lies some three miles from the Italian border – a task they say the French government is failing to do.

A symbolic crossing point into France, the Col de l’Échelle has in recent years been associated with the seemingly unending flow of migrants into the country, as many of those crossing the Mediterranean from Africa continue northwards. The country received 100,000 asylum seekers in 2017, not counting those that remain outside the system.

Close to 2,000 migrants arrived via the Col de l’Échelle alpine crossing, a steep increase on 2016 figures, the majority coming from the Ivory Coast, Mali and Guinea.

The campaign under the banner ‘‘Mission: Alps’’ is the highest profile action taken by the pan-European ‘’identitarian’’ movement since ‘’Defend Europe’’ saw the activists charter a ship last summer to monitor and deter illegal trafficking of migrants from Libya. The majority of those involved this weekend are French, joined by small numbers from Italy, Austria, Denmark, Hungary and Germany.

‘’With a little will, we can control these migrations. We’re going to take possession of the pass and watch that not a single migrant can enter France’’, Romain Espino, a spokesman for the group explained to French regional newspaper, La Provence.

‘’They won’t find their Eldorado here. It’s obscene – those who pay the costs are the French’’, he added.

Demonstrations by Génération Identitaire are increasingly prohibited by the French authorities. The group revealed to the Gateway Pundit that there had not yet been an official reaction despite extensive coverage in the French media today.

‘’ When we ask for permissions, they sometimes shut done our events. This time, we asked no one.’’

‘’The only persons from the village who came to speak with us were thanking us for the action’’, Espino explained.

The Franco-Italian border continues to be one of the main entry points into France, with significant numbers of mainly African migrants crossing at various points where geographically feasible.

Only days ago, French President Emmanuel Macron, a staunch supporter of German Chancellor Angela Merkel’s open borders policy declared in a television interview that Europe was now in an ‘’unprecedented” age of mass migration and that the destiny of the continent would be bound with Africa. An historic level of migration was ahead, he stated, declaring that the flow northwards into Europe would last for many years to come. Similarly, EU officials have spoken of plans to import tens of millions of African migrants over the next three decades.

While the inevitability of mass migration is increasingly presented as a fait accompli, with a little political will, illegal immigration can be combated and borders defended, Génération Identitaire told the Gateway Pundit, Saturday, explaining the reasoning behind this weekend’s high energy campaign.