On first appearance, it could be any London hipster café; quirky decor and a young urbanite staff and clientele. Yet the ‘Blighty UK’ café soon reveals itself as more of a welcoming neighborhood locale, taking the community spirit of wartime London as its inspiration. The establishment, described as a ‘’gem’’ by both regulars and coffee-house aficionados, comes complete with model Spitfires, an English breakfast homage to Churchill known as ‘The Winston’’ and a replica of the man himself.

Cue the righteous outrage from the millennial left, incensed on behalf of the victims of British colonialism, and scandalized that such a café could exist without apology in current year multicultural London.

Following vandalism and online intimidation, the North London café this weekend found itself occupied by activists in a bizarre, cult-like protest in which participants affirmed via chant their grievances against the owner and presented their demands before bemused customers.

“We cannot accept the unashamed colonial and gentrifying presence of this café’’, a po-faced young woman insisted, reading from a script before fellow protestors responded in unison that the establishment was ‘’making colonialism fashionable.’’

Demanding that owner, Chris Evans, apologize to the local community of heavily multicultural Finsbury Park, protest leader, Halimo Hussein, added that he must ‘’promptly change’’ his branding; ‘’from the menus to the settings to the decor of the café.’’

In a style of protest reminiscent of the ‘’Occupy’’ movement – minus jazz hands silent applause – the group of nine protestors proceeded to file out of the premises chanting ‘’It is our duty to fight for our freedom’’ and ‘’We have nothing to lose but our chains.’’ The affirmational chant was notably similar to actor Chia LaBeouf’s anti-Trump, ‘’He will not divide us’’ mantra. Heckled by a male customer, the group then switches to ”Churchill was a racist” as they exit the packed café.

UK tabloid ”The Sun” reports protest organizer, Hussein, 24, as Co-President of Equality and Liberation at the London School of Oriental and African Studies (SOAS). According to the ”Daily Mail’‘, the left-wing activist originally fled Somalia with her family before starting a new life in Britain. Media coverage of the incident has been largely supportive of the North London business and critical of the activism of Ms. Hussein and her supporters.

”I have already invited these people in for coffee to discuss their concerns”, Blighty café owner, Evans, 47, told the Mail. ”Instead, they have come in and shouted at my customers. My staff have been left frightened and so I am reporting the incident to the police today.”

In a separate incident, the café was recently forced to remove an exterior mural of Churchill’s signature victory salute, repeatedly daubed with graffiti including ‘’imperialist’’ and ‘’scum.’’

In spite of controversies dating from his decades long political career – from his role in the firebombing of German cities to colonial era atrocities in Ireland and Asia, iconic figure Churchill is largely recognized by a grateful nation as having led Britain to victory over Nazi Germany – with indomitable spirit and good humor.

‘’If we’re not allowed to celebrate one of England’s greatest heroes, what of England can be celebrated?’’, one frustrated Brit opined to the Gateway Pundit outside the café Tuesday lunchtime.

The campaign against the café appears to represent a new departure beyond historical debate; an attempt to revise the national memory to account for modern political sensibilities and a changing demographic. ‘’An Orwellian prospect in the home town of Orwell’’, as one American described it to us.

On the bright side for small business owner, Evans, the SJW intimidation has brought an out-pouring of support and new customers following last weekend’s protest, and even calls for him to expand his small London chain nationwide. With positive customer reviews now outpacing the negative SJW campaign by a wide margin, the café is close to making it into the capital’s Top 10 lists, a boon given London’s touristic prowess. 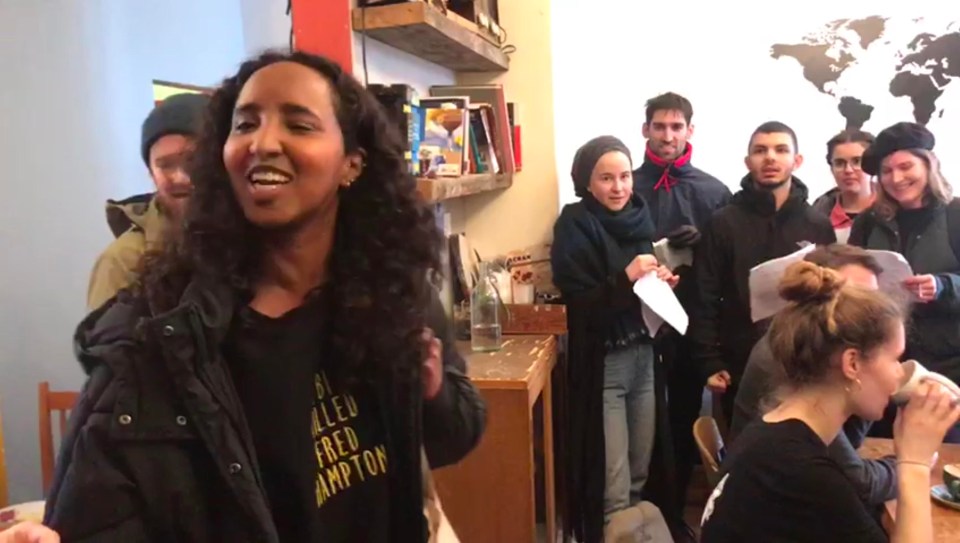