NFL stadium attendance continues to suffer as the backlash from players protesting the National Anthem extends into week 14. Fans from across the league are sharing photos of empty seats at kickoff and well into the first quarter this Sunday. Prompted by poor attendance, the teams like the Buffalo Bills are selling tickets at rock bottom prices. 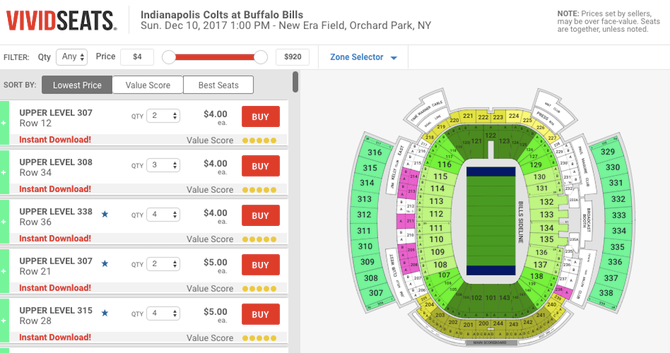 Tickets to the Colts-Bills game are selling for four dollars.  Vividseats.com

Not only are tickets going for cheap at some games, but this Thursday’s television ratings show yet another decline, says the Hollywood Reporter.

Thursday NFL showings this season, but again down from 2016. The overnight score represents a 14 percent spill from the comparable game last season. Still, in a NFL season beset by more ratings dips, particularly in primetime, NBC’s run of Thursday games has held up comparatively well.

Now for the empty seats…

Well into the first quarter and empty seats galore seen at the Browns game.

Congrats to Kirtland’s Tiger LaVerde on being a @Browns high school coach of the year finalist #GBvsCLE #HornetPride pic.twitter.com/Kvt9j0FfBI

15 minutes before the Tampa Bay Bucs and Detroit Lions kickoff. A lot of empty seats and A LOT of blue pic.twitter.com/w5Pzi8qsfp

Lots of blue and empty seats at Ray Jay pic.twitter.com/pImeJVNFzV

Arrowhead Stadium has plenty of empty seats at kickoff.

Ladies day with my mom and sister at #ChiefsKingdom pic.twitter.com/psEGQWvKdr

A sea of empty red seats are pictures below as the Raiders duke it out against the Chiefs in the first quarter.

Minnesota Vikings vs. Carolina Panthers at Bank of America Stadium

Many bright blue seats visible at Bank of America Stadium right before kick off.

This is BengalsSnob reporting live from Bank of America Stadium pic.twitter.com/6FrAr3sZpR

Attendance at the Vikings vs. Panthers game didn’t improve much as the first quarter got underway.

What a Panthers touchdown makes us do…smile! #Panthers #KeepPounding pic.twitter.com/qdE3BjrkJ1

Proof that the 49ers aren’t the only ones struggling with empty seats. pic.twitter.com/aV9SX8NnpH

Well into the first quarter and tons of empty seats can be seen at NRG Stadium.

Big attendance issues in the second quarter in Houston.

#SFvsHOU RT @RaceWeather: Where is everyone? Oh… this is everyone @HoustonTexans @[me] @NFL pic.twitter.com/yI8r37AAze

Tons of empty seats at Paul Brown Stadium. At our hotel they had $18 tickets available. #Bears #Bengals pic.twitter.com/ScIOhiIdxq

@EmptySeatsPics Who Dey Nation out in full force today. pic.twitter.com/QSq8A8lgwq

Hanging out here at @MLStadium with our great partners from Solutions Center for the Giants vs Cowboys game! pic.twitter.com/iOp08Jvz2o

Happy Birthday to me!

Where else would you rather be? Rhetorical question, actually.

Giants quarterback Eli Manning receives a standing ovation as he snaps the ball. Many empty seats can be seen in the footage below.

.@MLStadium gives Eli Manning a standing ovation as he takes his first snap as starter of the New York @Giants (second stint). pic.twitter.com/gLMUlNGSXG

Giants fans fired up for the return of Eli Manning pic.twitter.com/y2EbYXvow5