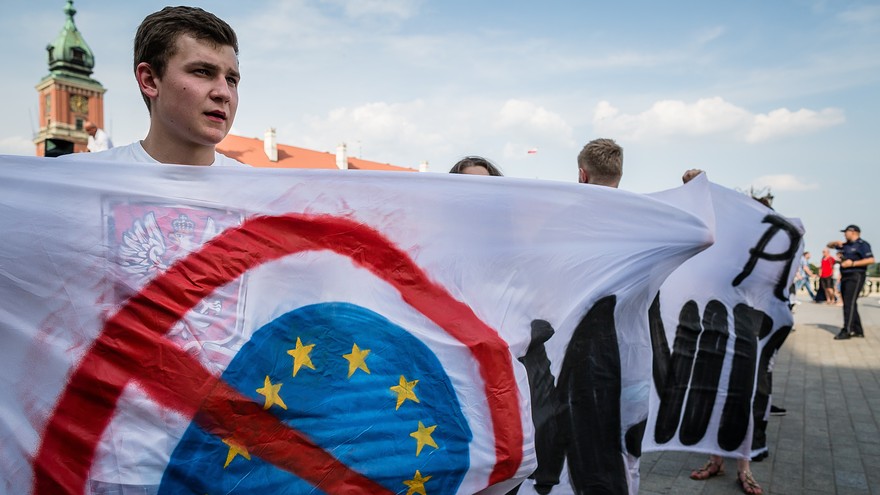 In spite of finding itself in the firing line of Brussels’ political elite, Poland’s conservative Law and Justice Party shows no signs of capitulation – and is maintaining popular support if recent polls are to be believed.

Refusing to buckle to Brussels’ demands – taking the form of a resolution passed by the EU Parliament on November 15th – the conservative Law and Justice Party was polling at between 43-47% in polls for the second half of November, significantly ahead of next nearest rivals, the pro-EU Civic Platform, and well above the 37.6% score that guaranteed the party an outright majority in the 2015 legislative elections.

Furthermore, the party has suffered no loss of support since the resolution was approved by a margin of 438-152 in the European Parliament last month.

It remains to be seen, however, if the imminent departure of Prime Minister Beata Szydło will impact on the party’s popularity. Szydło resigned Thursday and is to be replaced on December 12th by Minister of Finance, Mateusz Morawiecki. She will continue to serve in government as deputy prime minister.

On the same day Szydło made official her resignation, the EU announced legal action against Poland, along with Hungary and the Czech Republic, for “non-compliance’’ in accepting thousands of non-European migrants in a continent-wide resettlement scheme.

Since 2014, Poland has welcomed at least one million Ukrainians, but is refusing to follow the path of western European multiculturalism – much to the chagrin of Brussels which has plans to welcome tens of millions to Europe by mid-century.

Last month’s resolution reads like a veritable ‘’J’accuse!’’ against Poland, listing multiple grievances which according to the EU represent ‘’a clear risk of a serious breach’’ of European values.

Atop the list, the Polish government’s project to reform the judiciary including putting communist-era judges out to pasture, its refusal to condemn the “xenophobic and fascist march that took place in Warsaw” (Poland’s Independence Day march of November 11th) and what the EU brands as a failure to uphold women’s rights regarding prescription-free access to abortifacient drugs and attempts to limit abortion, particularly eugenic abortions.

The resolution also accuses the Polish government of hindering access to state funds for ‘’critical civic society groups’’ and cites reports by left-leaning NGOs Amnesty International and Human Rights Watch. One amendment to the resolution makes a point to condemn what the EU calls ‘’acts of political persecution’’ by Polish authorities against ‘’communists, anti-fascists and other democrats.’’

Passed in the European Parliament only days after media condemnation of Poland’s National Independence Day march – which saw 60,000 Poles march across Warsaw under the banner ”We want God” – the resolution could see the suspension of the country’s voting rights within the European Council.

Of the many issues leading to such sanction, it is the conservative government’s actions to reform the judiciary which have drawn the most criticism. Law and Justice Party leader, Jarosław Kaczyński, has described the judiciary as ‘’one of the strongholds’’ of Poland’s communist past, being a vestige of the pre-1989 communist regime and its ‘’rampant leftism.’’ The Polish government has suggested that opposition within the country to this and other measures is organized by foreign PR firms and the influence of George Soros.

Frustratingly for the political class in Brussels, not only is the Polish government planning to fight legal action on its refusal to accept migrants, and pushing ahead with revised changes to its legal system, it now appears that a grassroots drive to restrict abortion may succeed where a previous government attempt failed last year.

A Citizens’ Legislative Initiative bill signed by close to a million Poles, submitted to the Sjem (the Polish parliament) last week, calls on the government to ban abortions on the grounds of potential disability. President Andrzej Duda, also of the ruling Law and Justice Party, will likely sign such legislation into law if approved by parliament.

Brussels will be watching for diplomatic overtures from incoming Prime Minister Mateusz Morawiecki next week. Failing this, the EU will concentrate on legal actions against Poland, playing a waiting game until the next election in 2019 and counting on a change in government to roll back the conservative measures it so vehemently opposes.

Biden-Harris Administration's New Gaslighting Video Is Over-the-Top - Kamala: "I Think We Are Off to a Great Start..."