George Soros has spent countless billions on 'Open Society Foundations' to undermine national borders and the nation state across the EU. It could be the biggest level of international political collusion in history.

Two and a half minutes of speaking time was all it took for Nigel Farage to cause squirming in seats this afternoon in the European Parliament (Strasbourg) during a debate on financial transparency and the recently published ‘Paradise Papers’.

No stranger to rattling political cages, Farage, chief architect of the UK’s departure from the EU, turned attention to what he claimed may become ‘’the biggest level of international political collusion in history’’ – the influence of billionaire George Soros’ cash within the structures of the European Union.

Whilst questions on the use of money in the Trump election and the Brexit referendum have ‘’reached a level of virtual hysteria’’, Farage wondered aloud if those worried about subversion and political collusion were not looking in the wrong place.

Ordinarily drawing heckles from political adversaries, the chamber remained largely silent for the bulk of the British MEP’s comments on Soros’ lobbying within the EU.

“George Soros recently gave Open Society – his organization, which of course campaigns for free movement of peoples and supports supranational structures like the European Union – he recently gave it $18 billion and his influence here and in Brussels is truly extraordinary.’’

Soros’ Open Society Foundations have boasted of having had 42 meetings last year with the European Commission, Farage claimed, the Commission being the powerful, unelected branch of EU government responsible for new legislation.

“They’ve even published a book of ‘reliable friends’ in the European Parliament, and there are 226 names on that list.’’

So I shall be writing today to all 226 of you, asking some pretty fair questions.’’

The former leader of the UK Independence Party continued by detailing the exact questions he would be posing;

‘’Have you ever received funds, directly or indirectly, from Open Society?

How many of their events have you attended?

Could you please give us a list of the meetings of all the representatives including George Soros [that you have met with].’’

Farage concluded with a call for the Parliament to set up a special committee to look into the matter, later adding on Facebook;

‘’George Soros has spent countless billions on ‘Open Society Foundations’ to undermine national borders and the nation state across the EU. It could be the biggest level of international political collusion in history.”

On his evening radio show on London’s LBC, Mr. Farage revealed that relentless questioning on alleged Russian involvement in the US Presidential election and Brexit referendum had prompted him to speak out about the lesser discussed Soros influence in EU political matters. 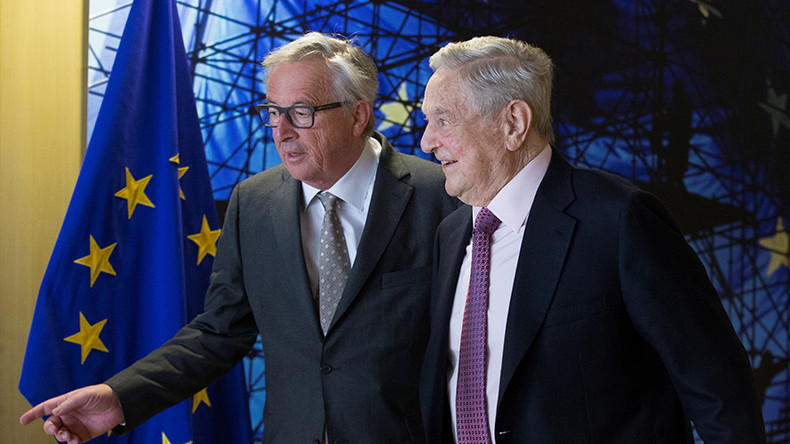