‘’New Germans? We’ll make them ourselves’’, the populist AfD (Alternative für Deutschland) poster proclaims from lamp posts across Germany. The accompanying image shows a smiling pregnant woman reclining on the grass. The expectant mother is –  controversially for this country – German.

A counter-cultural message which has caused a stir in a nation led for twelve years by Angela Merkel, where the accepted wisdom increasingly has it that the country’s immigrants will be replacing its dying generations, rather than native Germans unwilling to do the job.

With just under two weeks to go until the general election, the Eurosceptic and nationalist AfD is spending much of its war chest on a guerrilla marketing style campaign which speaks to national concerns over the country’s rapidly changing demographics and the growing influence of Islam on German society.

Whilst German in design, Der Spiegel reports that the AfD have turned to Vincent Harris, founder and CEO of Texas-based Harris Media, to advise on the digital component of the campaign. Harris made a name for himself as a strategist on several high profile Republican campaigns, most recently working with Senator Rand Paul as Chief Digital Strategist.

As well as internet savvy marketing, the hipster conservative brings his Silicon Valley access to the table, priceless for a political party on the wrong side of Germany’s increasing online censorship.

A meme linking Merkel’s migrant policy with jihadi terrorist attacks in Europe, which recently appeared on the timeline of German Facebook users, succeeded in extending the online reach of the AfD, bypassing German Facebook censors.

The controversial image, part of Harris Media’s tailored digital strategy, depicted bloodied tire marks with the dates of recent Islamic terrorist attacks across Europe, with a direct translation of, ‘’The tracks of the World’s Chancellor through Europe.’’ In less clunky English; ”Merkel leaves her mark across Europe.”

The campaign linking the German chancellor’s migrant policy with the loss of national identity and with terrorist attacks committed by migrants appears to be bearing fruits; having lost steam in the polls since early 2017, the newcomer AfD is gaining ground and looks set to enter the Bundestag, Germany’s federal parliament, for the first time.

Despite being greeted by jeers and cries of ‘’traitor’’ at campaign stops, Merkel continues to ride high in the polls and is expected, bar an election day surprise, to lead the country for an historic fourth term.

If the latest polls are accurate, however, the AfD – founded only four years ago – would become the third largest party in Germany. 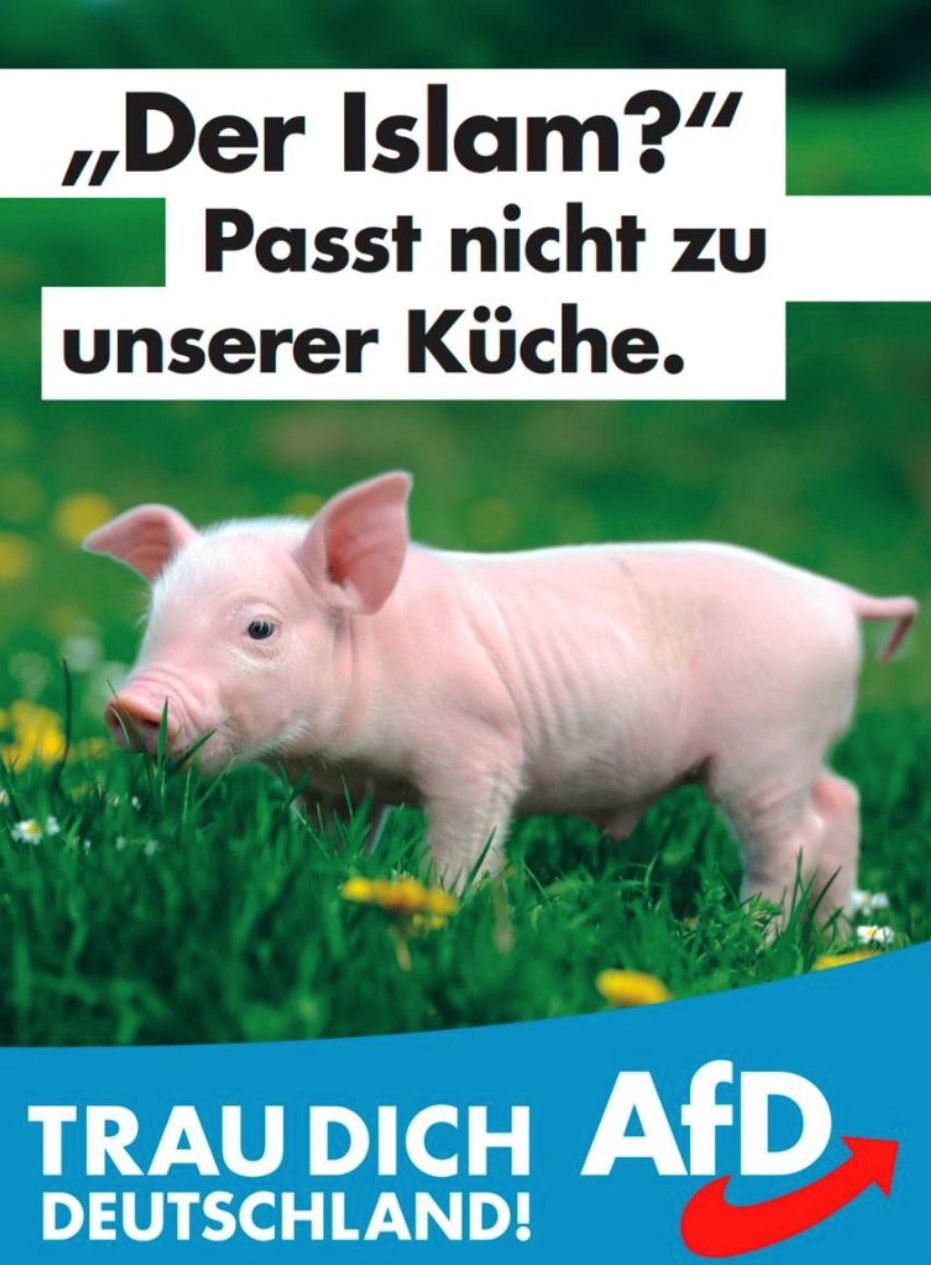 Of the eye-catching poster strategy, not all of the designs have made it to the streets, with one being canned for an unusual reason. Featuring a cute piglet and the slogan, ‘’Islam? It doesn’t fit with our cuisine’’, party strategists concluded that the image would evoke too much sympathy for the frying pan-bound pig and distract from the theme of the campaign.

Germany goes to the polls on September 24th.