Share Email Print
At an event Thursday evening at the George W. Bush Presidential Center, former Presidents Bill Clinton and Bush 43 reflected on what it takes to become President of the United States. Clinton’s words are particularly interesting given his wife’s experience in 2016. Bill Clinton appears to throw his wife Hillary under the bus, referencing her tone-deaf 2016 presidential campaign.

FORMER PRESIDENT BILL CLINTON: I think you have to begin with the end in mind.

Yeah, you have to win the election, but why in the Heck are you running?

That’s the other thing I noticed about [President Bush]. When he ran for governor against Ann Richards, he didn’t say Ann Richards is a klutz. He said I want to be governor because I want to do these three things.

A couple of them I didn’t agree with, but he had an agenda.

If you want to be president, realize it is about the people, not about you.

And when it is over, and that’s what a lot of these people who get real arrogant in office, they forget. Time passes. And it passes more quickly than you expect.

You want to be able to say: People are better off when I quit, kids were having a better future, things were coming together.

You don’t want to say: God, look at all the people I beat. The people I worked over.

I think the most important thing is to be humble, to listen, to realize everyone has a story.

Former Vice-President Joe Biden said recently that Hillary Clinton had no message or motive to run. Biden was baffled by the run, admitting he couldn’t figure out what she stood for.

“I don’t think she ever really figured it out,” Biden told the Los Angeles Times’ Mike Memoli. “And by the way, I think it was really hard for her to decide to run.”

Biden said Clinton likely felt obliged to run for president and that the historic nature of her bid weighed on her decision-making.
“She thought she had no choice but to run. That, as the first woman who had an opportunity to win the presidency, I think it was a real burden on her,” Biden said.

Thursday’s interview was the latest assessment from the Obama administration about why Democrats fared so poorly in this year’s vote. Biden, along with President Barack Obama, have argued their party didn’t pay enough attention to working-class voters outside large urban centers.

Not only do fellow Democrats believe Hillary Clinton had no message, but her own alma mater believed so too. In a study conducted by Wellesley’s Media Project, the report found Clinton’s loss was greatly attributed to her lack of policy ideas.
The Washington Examiner reported:

A new study from Wesleyan University’s Media Project notes that the 2016 presidential race featured “one candidate who almost ignored discussions of policy.” Can you guess which candidate that was?

I will admit, after months of Trump’s “Lyin’ Ted,” “Little Marco” and “Crooked Hillary,” I wasn’t expecting Hillary Clinton to be the answer to that one. But by the measure of this paper, it wasn’t even close. Here’s the chart they use to illustrate that “Clinton’s message was devoid of discussions of policy in a way not seen in the previous four presidential contests.” 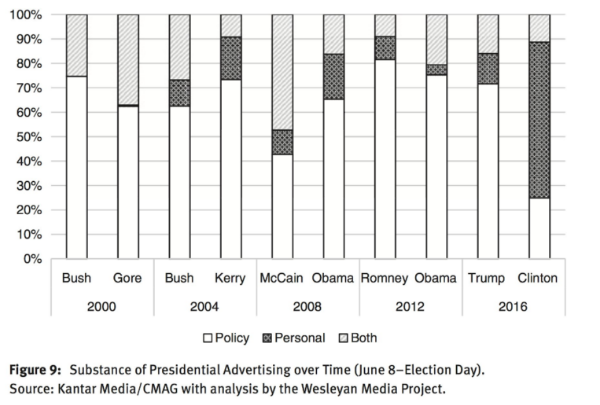 This is perhaps easier to understand when you recognize that it’s about the advertising she ran. And thinking back, it sounds about right. Most of her ads were either attempts to humanize her or exploit Trump’s many egregious comments.

The only Clinton ad I actually saw on television (as opposed to online) during the campaign was the one here, during the World Series — an attempt to exploit Trump’s, er, personality. (I wasn’t happy, by the way, because my children actually were watching with me, and I’d mostly protected them from last year’s garbage.)