Mystery surrounded the final event of Marine Le Pen’s election campaign this morning. As she left her Paris headquarters, there was no indication given to the press as to where she and her entourage were headed for the final hours of campaigning.

A tweet from the Mayor of Reims warning that she was not welcome in the city soon gave the game away, and time for left wing opponents to gather a welcoming committee.

Le Pen and recent ally, Nicolas Dupont-Aignan, visited the historic cathedral of Reims for one hour as a noisy crowd of students and agitators organized via social media milled outside the entrance, chanting anti Front National slogans.

At it’s peak, the protest resembled a frenzied witch hunt with the most violent of agitators screaming insults and having to be held at bay as the presidential candidate left the cathedral.

Journalists were quick to characterize the visit as a public relations disaster, and there was a certain schadenfreude in reporting the details of Le Pen’s final stop along the campaign trail.

In choosing the site as her last campaign stop, Le Pen was acknowledging the history and Christian roots of France, Gothic Reims cathedral and its predecessors being where Christian kings came to be anointed and crowned for over a thousand years.

‘’Zero dignity!’’ Le Pen tweeted after being pelted with eggs, screamed and cursed at upon leaving through a side door, accusing the mob of no respect for the sacred and symbolic site. 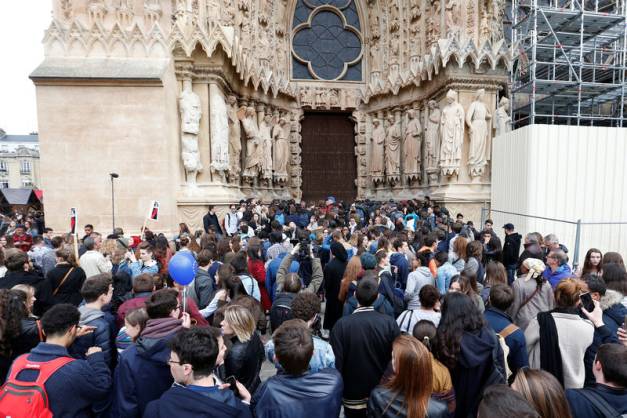 On arriving back in Paris, Le Pen laid the blame firmly at her rival’s movement, ‘En Marche!’ (Forward!) for organizing the ‘horde’ which protested her visit, essentially besieging her inside the cathedral.

Rival, Macron, had a more serene and protest free morning, visiting Rodez cathedral in the south before returning to Paris to do a final media interview. His team denied any involvement in targeting Le Pen’s event.

There is now less than an hour to go until the campaign officially ends, and before a national broadcasting ban commences.

Lobby groups, artists, and politicians have been using the last hours to urge voters to unite against Marine Le Pen but there are still fears amongst them that a proportion of the left-wing electorate – who consider Macron to be the marketing candidate of the big banks – will simply stay home on Sunday, or ‘vote blank’, causing a Trump or Brexit style upset.

Describing herself as religious but having fallen out with the Catholic church, this is likely what Le Pen will be praying for, and that the popular anger felt across France in recent years will translate into victory for her campaign at the polls.