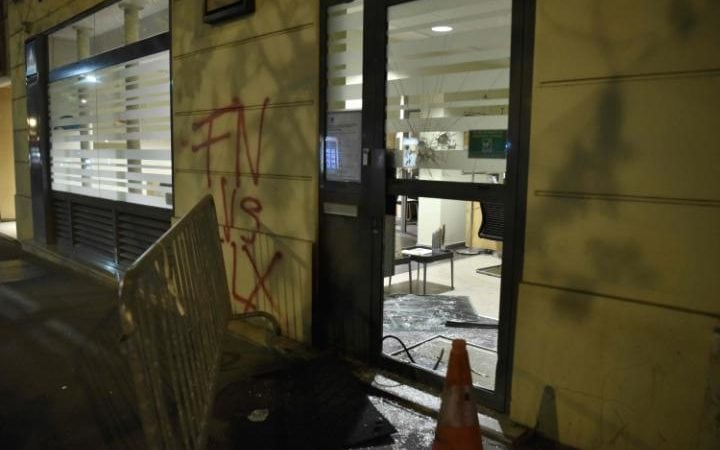 Paris – Marine LePen’s presidential campaign headquarters were attacked early this morning in an arson attempt claimed by a leftist group calling itself ‘’Combat Xenophobia’’, which is threatening more attacks between now and the French presidential election.

A unit of Paris’ fire department extinguished the fire just before 3am on Rue de Faubourg St. Honoré, in Paris’ 8th arrondissement. The building, also housing an insurance company and residential apartments, sustained only minor damage at the entrance to the campaign office.

A police spokesman said that the fire was ‘’not natural’’ and ‘’probably of criminal origin’’. Graffiti was also daubed on the building.

In a communication to the AFP (Agence France-Presse), the ”Combat Xenophobia” group claimed they had used Molotov cocktails in the attack.

LePen criticized the government this morning for allowing extreme-left groups to act with ‘’total impunity’’ and expressed her intention to make an official complaint, claiming that her party was not informed of the attack by the services of the state, having to learn about the event from the news media. Security requested at the office had been refused, she claimed, despite her party having been revealed as a prime target for extremists, specifically Al-Qaeda and the Islamic State.

France – although shifting politically – has been defined by the left since the 1968 student ‘’revolution’’, and has an active and well organized extreme-left which frequently clashes with police and political opposition.

Some have made light of the event. When asked for comment on morning television on the attempted arson attack, a smiling Christine Poupin of anti-capitalist party, the NPA, stated that ‘’They [the Front National] should extinguish their cigarettes. They need to be more careful.’’

LePen sent out a defiant tweet between scheduled television appearances this morning,

‘’Those who plan to intimidate us are badly mistaken. Nothing stops the French patriots! Our determination is total.’’

With only ten days to go until the first round of voting in France’s presidential election, campaigning is at a frenetic pace with many voters still undecided.