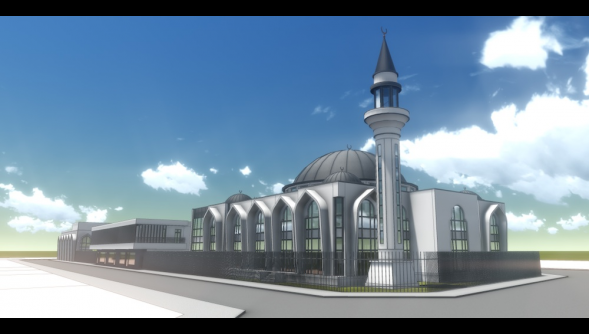 Roubaix is a northern French town, close to the Belgian border. Counting just under 100,000 inhabitants, it is home to the celebrated art installation, ‘La Piscine’, located within a grandiose Art Deco era swimming pool, and to the rough terrain Paris – Roubaix bicycle race, one of the world’s first cycling fixtures dating from 1896.

In recent times, Roubaix has been defined by its poverty, having the undesirable distinction and recent media celebrity of being France’s poorest town, with an estimated 45% of its residents living below the poverty line and an unemployment rate of 30%.

The former textiles boomtown northeast of Lille saw its industrial prowess dwindle from the 1970s onwards, and has since witnessed a demographic transformation due primarily to mass immigration from France’s former colonies and beyond.

Today an estimated 40% of its residents hail from Muslim countries and the town’s urban landscape is changing to reflect this reality; in its Islamic bookstores, its boutiques selling hijabs and long veils, in its halal butcher shops.

The change can also be seen on the streets of Roubaix – in the faces of the new population, many sporting the clothing and custom of Salafist Islam; bearded men in long garments of a type worn in Islamabad or Kabul, women veiled, some even dressed in the full-covering niqab banned in France.

Perhaps the changing nature of Roubaix can best be measured in the recent flurry of mosque building and the announcement this week that the town’s sixth mosque, the Turkish affiliated Eyüp Sultan mosque, is nearing completion, its large and seven smaller domes finally taking shape.

The frame complete, only the minaret remains to be put in place, a minaret which will rise to some 21 meters (69 feet), dominating the local skyline.

Several months from completion, the six-million-euro mosque ($6.4 million), funded by a Franco-Turkish association will have its imams supplied by Turkey.

Roubaix is not alone, with local organizations and foreign governments – Algeria, Morocco, Saudi Arabia, Qatar and Kuwait amongst them – funding hundreds of new mosques across the country, from smaller barely noticeable prayer-rooms to high profile minaret-topped ‘cathedral mosques’ in the larger towns and cities.

With imams often supplied by such governments, many French are wary of a foreign influence and an extremism installing itself in their midst via the most radical of these mosques.

France has seen large numbers disappear to join the battlefields of Iraq and Syria, more than any other European country. At least a dozen have quit Roubaix for Syria, six of whom have been killed in the conflict.

Whilst an exact figure for mosques in France is not available, the Interior Ministry estimated in 2012 that there were 2449 in the country, up from 1536 a decade earlier. In 1970, there were no more than 100 in the entire country, mostly in the quarters of foreign workers.

Calls have come from Islamic groups to double the number of mosques in order to meet demand and upgrade older facilities, even to appropriate disused churches, a phenomenon widely underway across the channel in neighboring England.

Whilst the opening of new mosques is reason for celebration amongst France’s Muslim population, it is not universally welcomed, with some wondering how long it can be before the Islamic call to prayer is broadcast from minarets across the rooftops of France.

Unlike several other European countries, the call to prayer does not emanate from France’s mosques. Yet there is a desire amongst some adherents of Islam to institute the practice here – if church bells ring out, so too should the call to prayer be broadcast from the minarets, they argue.

The peculiarities of France’s secular tradition and famous 1905 law on the separation of church and state prevent such an eventuality for now, yet it may just be a matter of time given the demographic revolution transforming the country.

Home to innumerable saints and a solid bastion of Catholicism for many centuries, the ‘eldest daughter of the church’ has a new sibling in its house, one which is quickly reaching maturity, it seems, and growing in confidence to assert itself.