For years the liberal media has undreported or completely ignored the annual “March for Life” in Washington DC.

In 2009 AP said the March for Life was only three blocks long. 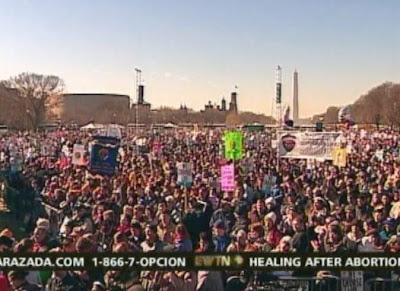 (Photo from EWTN broadcast of the march)
Michael Novak reported oh the march that afternoon. It was broadcast on EWTN. Michael said he watched for nearly three hours as the march just kept streaming up the street, often as many as fifteen abreast.

More than 100 buses carrying 5,000 Pittsburgh-area residents made the trip alone.

During the interview Trump scolded the liberal media not reporting on the annual “March for Life.”

Trump even suggested their numbers may be as large or larger than the women’s pussy hat march.

During a Wednesday night interview with ABC, President Trump called out the media for covering a pro-abortion march but ignoring the March for Life.

ABC’s David Muir asked Trump if he “could hear the voices from the women’s march here in Washington?”

“I couldn’t hear them, but the crowds were large,” Trump responded. “You’re gonna have a large crowd on Friday, too, which is mostly pro-life people. You’re gonna have a lot of people coming on Friday, and I will say this, and I didn’t realize this, but I was told, you will have a very large crowd of people. I don’t know – as large or larger – some people say it’s gonna be larger. Pro-life people. And they say the press doesn’t cover them.”