This year Olympic viewers are in for a real treat. The women’s 800 meter track and field finals is something you will not soon forget. The reason is because this year’s finals includes 7 really strong female runners and a hermaphrodite.

Caster Semenya of South Africa is so strong in this race that she literally runs like a man. This is because she arguably is a man.

The former 800 meter champion was asked in 2009 to undergo a gender verification test. 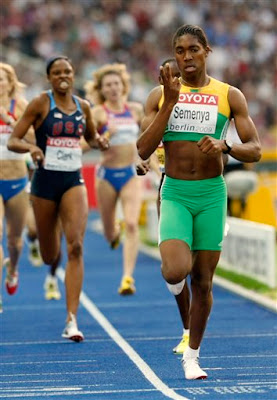 She was later disqualified to run as a woman after testing showed her testosterone levels were off the charts.

But the Olympic committee recently changed the rules and now Caster is once again able to compete with and soundly defeat your average, everyday female runner.

Runners World noted before the Olympics that Semenya is biologically different than other women in the race, at least to some degree. In past Olympics, she might have been disqualified, or even accused of being a man, but not in Rio.  The Olympics committee changed the rules this year.

Semenya has been allowed to run and now she is in the finals. The 25-year-old Semenya is also now a favorite to win gold. She dominated her heats in the prelims. Some speculate that Sunday may be the day Semenya beats a 33-year-old world record.

If you’re a betting man, or woman… Caster Semenya is a safe bet to win gold on Saturday.