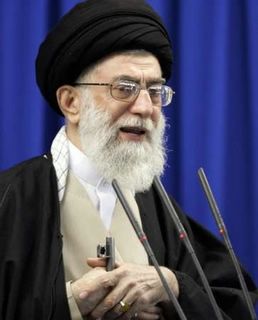 Iran’s Supreme Leader Ayatollah Ali Khamenei holds an AK-47 as he speaks at the University of Tehran October 13, 2006. (Reuters)

Citing “people briefed on the correspondence,” The Wall Street Journal is reporting that President Obama wrote a letter to Iran’s supreme religious leader Ayatollah Ali Khamenei this past October.

The letter, according to the newspaper, was about the U.S.-led fight against the so-called Islamic State.

“The letter appeared aimed both at buttressing the Islamic State campaign and nudging Iran’s religious leader closer to a nuclear deal.

“Mr. Obama stressed to Mr. Khamenei that any cooperation on Islamic State was largely contingent on Iran reaching a comprehensive agreement with global powers on the future of Tehran’s nuclear program by a Nov. 24 diplomatic deadline, the same people say.

“The October letter marked at least the fourth time Mr. Obama has written Iran’s most powerful political and religious leader since taking office in 2009 and pledging to engage with Tehran’s Islamist government.”

During his regularly scheduled press briefing, White House Press Secretary Josh Earnest was asked about the report and responded that he was “not in a position to talk about private correspondence between the president and another world leader.”

It’s not the first time Obama has reportedly reached out to the regime.

Iranian expert Dr. Michael Ledeen was on with Mark Levin recently to discuss Obama’s history with Tehran. Ledeen told Levin that Obama sent former Ambassador William G. Miller to Tehran in 2008 to assure the mullahs he was a friend of the regime.

During his first presidential campaign in 2008, Mr. Obama used a secret back channel to Tehran to assure the mullahs that he was a friend of the Islamic Republic, and that they would be very happy with his policies. The secret channel was Ambassador William G. Miller, who served in Iran during the shah’s rule, as chief of staff for the Senate Select Committee on Intelligence, and as ambassador to Ukraine. Ambassador Miller has confirmed to me his conversations with Iranian leaders during the 2008 campaign.