Only sporadic violence marred the highly anticipated 2005 elections.
Turnout was higher than expected. 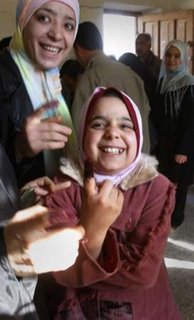 A young Iraqi girl shows her inked finger after her mother and grandmother voted in Baquba, 50 km (30 miles) north of Baghdad December 15, 2005. Polls opened on Thursday in Iraq’s first election for a full four-term parliament since the fall of Saddam Hussein. Some 15 million people are eligible to vote in an election which Iraqis hope will end decades of suffering, lift living standards and pave the way for a withdrawal of U.S.-led troops. (REUTERS/Bob Strong)

Ayad Saidi, an Iraqi citizen from Najaf expresses his support for the the U.S. war in Iraq in McLean, VA. on Tuesday, Dec. 13, 2005. Iraqi citizens will cast their votes over the next three days to help elect Iraq’s first full-term parliament. The voting center is one of eight nationwide. (WPN)

Al-Qaeda fighters linked to the Islamic State of Iraq and al-Sham (ISIS) carry their weapons during a military parade. The terror group is planning to take siege of Baghdad. (Al Monitor)