The Obama Administration closed War Memorials to WWII Vets, shut down privately-funded parks and threatened to arrest WWII Vets who go past their barricades. They want to make people feel the pain.

The same sort of bullying is happening in the states, and one governor is fighting back. 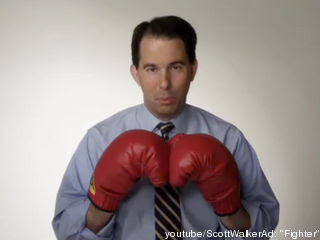 photo via The Political Junkie

Via Instapundit, the Journal-Sentinel reports:

The state Department of Natural Resources on Wednesday refused a directive from the National Park Service to close a host of popular state properties because of the federal government shutdown.

The park service ordered state officials to close the northern unit of the Kettle Moraine, Devil’s Lake, and Interstate state parks and the state-owned portion of the Horicon Marsh, but state authorities rebuffed the request because the lion’s share of the funding came from state, not federal coffers.

. . . in a sign of defiance, the DNR removed the barricades at the landing, saying it had the legal authority to operate the launch under a 1961 agreement with the federal government.

Gov. Walker is fighting the federal bullies. He’s more of what this country needs.